Yes, it says September Menu 2015 but it really is October's menu. I forgot to change the month at the top.

A bunch of new recipes to try this month: Pumpkin Bread (only because Elizabeth made this recipe while we were up visiting and I only had 1 piece of bread and I'm dreaming of this Pumpkin Bread), Bacon Onion Horseradish Mashed Potatoes (yum, horeseradish!), a couple of main dishes: Kielbasa, Peppers, Onions, and Potatoes Hash, Herb Roasted Cheesy Bacon Potatoes, and Chicken with Sundried Tomato Sauce, and then a couple more Small Group desserts: Country Apple Fritter Bread and Blueberry Cinnamon Swirl Crumb Coffeecake.

And a month chalk full of deliciousness!

I have completed my 30 New Books in 2015 project and decided I needed to just continue the project by raising my goal to 60 New Books in 2015. Vince Flynn's novels, having read through all of them, took me over the thirty mark and I still had a stack of books on my bookshelf, including J.D. Robb's latest In Death yet to read.

Lack of time most recently has left me reading-less but with no looming big projects on the horizon I plan on tackling my stack of books and even head to the library choosing a few that are on my running reading list that I keep in my purse.

I can't say enough about the Vince Flynn Mitch Rapp series and while a couple left me wanting more I came across a favorite:

Consent to Kill is undoubtedly my favorite of all Vince Flynn's novels although Term Limits, which I'd read a couple months ago comes in a close second. I am interesting to see what happens to Flynn's Mitch Rapp series in the hands of the new author after the death of Flynn.

And then there is J.D. Robb's latest, Devoted in Death. She just never misses. I would be ever-so-happy for Robb to never finish this series. They are just that good.

I asked Ella to sit down with me while we were visiting this weekend and I asked her some questions. I've wanted to do this type of page for awhile and hope that I'll be able to do this every year (somehow) and also, ask the same questions of Wyatt and Ian, too. This was so much fun!

We have really been enjoying our time with Elizabeth and the kids!

Besides John and Jarrod's Eagle Project Book which they put together required by the Boy Scouts to present to the Eagle Scout board that they did at the end of July, I wanted them to have a keepsake album of their individual projects. Granted, I could have made a digital book but I was short on time, mostly because I didn't think about it until a couple of weeks before their Eagle Scout Court of Honor. Instead, I chose a simple 4 x 4 black Amelia album that I purchased from Scrapbook, plus 4 x 4 page protectors.

I found a photo of the Eagle medal that each of the photos would receive at their court of honor to use as the back drop for the album label as well as the 4 x 4 journal cards seen below.

Honestly, I believe these journal cards are my favorite part of this album project. I modified the opacity of the Eagle medal emblem, layered a digital stamp set of lines over top, added journaling and printed the cards on 8.5 x 11 white cardstock. Very simple but they make the albums very Eagle Scout - y.

I chose just a smattering of photos from their project, putting them in the order of the work that was accomplished, telling the story very simply, inserting journaling cards here and there. It's definitely not the full blown story but it's enough to jar their memories as they might pick them up to re-look at their accomplishment.

A before and after...of just the deck.

Setting the example by not being afraid to get in and work the project also.

And then Jarrod's project too...

I had made an 8.5 x 11 double page scrapbook layout and this was the left side of the layout that I cropped to include into his album.

Humble beginnings for a wonderful cause. An exciting thing that occurred from their Eagle Court of Honor. Another Life Scout who is just months away from his 18th birthday decided he'd go for Eagle Scout and will be supporting the same non-profit organization, Hoofs 4 Healing, that John and Jarrod completed projects for.

Jarrod's project ended up being twice as involved as John's after the city building inspector decided an handicap access stumble-free path needed to be built too.

Everything about their projects were awesome! The work was exceptional, high quality, and just plain rocked!

One of my handsome Eagles! 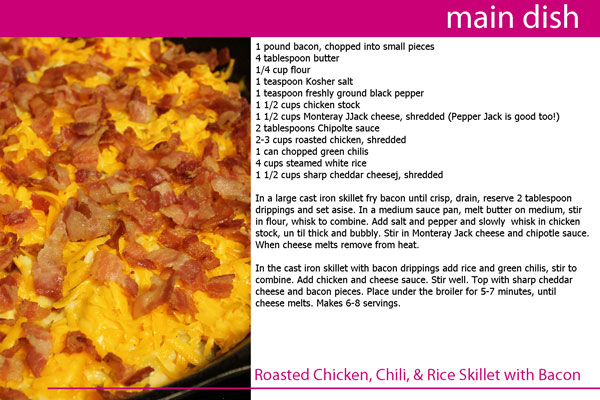 The Picky Palate makes delightful recipes and when I saw a chicken and rice skillet dish, with bacon no less, I just had to make it! And, of course I just had to make it our own. This dish is pure, unadulterated comfort food: cheese, lots of cheese, roasted chicken, such lovely flavors, steamy rice, smokey green chilis, a touch of chipotle heat - and bacon. Just a pound of bacon to sprinkle on top. Flavorful combination all around.

Obviously, I served it with a salad. Duh.

'Tis true I made this in the southern August heat. Ok, not the best time. But, it sure was good! And it was very easy to put together and perfect for one of my really bad days of pain. A day when I needed the comfort food.

We have a huge, 14-inch cast iron skillet, that on those really bad days of pain I can barely lift, but I used for this dish and, man, does this make a ton of food. Serves 6-8 easily. We had plenty of leftovers to enjoy.