all about me | READ June 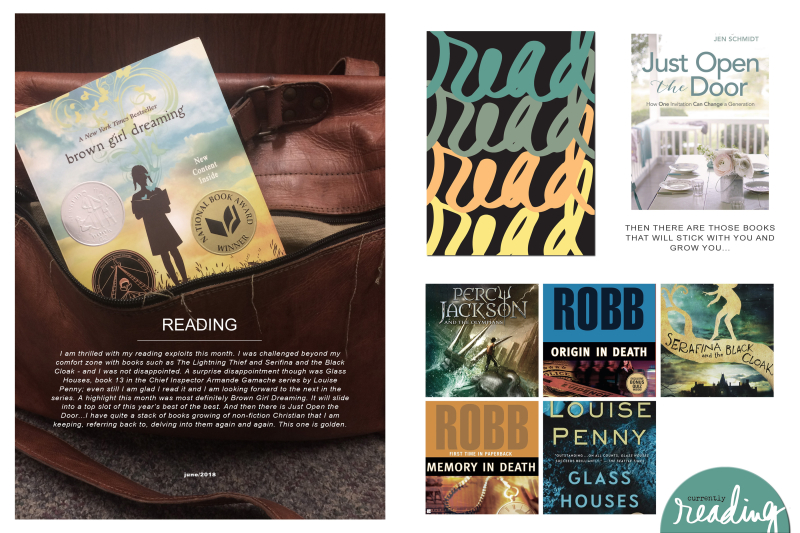 Today I am sharing what I have been reading in June 2018. For the most part I've had at least one book, or two, or three going at one time which is very normal for me. Generally, one or two fiction and a non-fiction. This month Just Open the Door by Schmidt was a looong non-fiction read, however worth it! I read almost everyday this month, yet I was still only able to complete 8 books.

The Lightning Thief, Percy Jackson & The Olympians by Rick Riordan. The other afternoon I was flipping through our DVD's looking for something to watch. I'd made a cup of coffee, changed into pajamas ready to snuggle in for the rest of the day and rather than watch NETFLIX which I might normally have done, or a television series on DVD I opted for a movie. Percy Jackson: the Lightning Thief passed through my visual scope. I'd never seen the movie, deeming it: not something I was interested in. But, I thought, it would be a connection with my sons that I hadn't breached. I plopped the disc into the changer and started watching. Jarrod came out of his room when he heard the television come on wanting to see what I was watching. His jaw dropped. He exclaimed, "Mother!" in unbelief, "What are you watching?" exclaimed Jarrod, rhetorically.

Of course, he very well knew what I was watching. He went back to his room and shut down his video game and came back out, grabbed a cup of coffee and snuggled in to watch the movie with me. I had to reprimand him a couple times not to give any secrets away, but other than that I thought it was a pretty good movie. Jarrod went back to his room afterwards and brought out his beloved, well-worn copy of The Lightning Thief. I was pleasantly surprised even though it was seriously outside of my comfort zone. 45/100 books read in 2018.

Origin in Death by J.D. Robb. Book 21 of the 47 (so far) book series. I know. 47 books. Criminal investigations. Murder. Snarky humor. Really creative story line. This one was way out there, but I loved it.

Affaire Royale by Nora Roberts. Meh. I have only read a few Nora Roberts (except for her nom de plume, J.D. Robb whom I adore) and I have only enjoyed one or two of her full-length novels. On the off chance I pick up another here or there I'm always disappointed. Affaire read too much like a Harlequin Romance which I abhor; and, disappointed I even bothered with the purchase. Maybe, next time I even consider picking up a two-story paperback by Roberts I will be at the library for no money loss involved. I think this could have been an intriguing story line for a lengthy novel with tons of suspense and intrigue, unfortunately it fell flat and left so much to be desired. 47/100 books read in 2018.

Memory in Death by J.D. Robb. Definitely not a favorite of the In Death series books. It didn't have that who dun it and how is Eve going to get there from here in finding the answers, draw, or excitement. I recalled it not being a favorite re-read, previously, but I didn't want to skip it this time around. 48/100 books read in 2018.

Just Open the Door by Jen Schmidt. This book is long! Don't let the 195-pages fool you. The book print is tiny. But. Schmidt has a lot of important stuff to stay regarding the Jesus way of hospitality and you won't want to miss one word. I love the reader questions and her answers at the end of each chapter. She gives tons of examples for the types of hospitality she is sharing in each chapter. I didn't feel condemned or condescended but convicted in a healthy way. I wasn't unaware of the hospitality Jen writes about, I've read blog posts over the years, magazine articles, and even discussed this type of hospitality in Bible study classes, that re-directed the idea of hospitality being more than a beautiful home and having everything just right before you open your home, to the kind of hospitality that Schmidt thinks Jesus meant - and that hospitality goes way beyond our own home. This may or may not be a favorite book of the year. But, it will be one of those books I hold onto, reference, and re-read, slowly, again. 49/100 books read in 2018

Brown Girl Dreaming by Jacqueline Woodson. What can I say that hasn't already been said? Beautifully composed. Written in free verse, it caught me off guard and yet captured my attention immediately. I imagined I was sitting on a back porch swing overlooking a field of growing vegetables in the blistering summer drinking sweet tea or lemonade that came from a stand along a dusty road listening to these stories; and at other times I was in crowded cement streets and sidewalks, clothes lines hanging out windows, kids hollering and playing, music blaring, car horns honking, and a fire hydrant let loose with water spewing forth cooling down the neighborhood and laughter abounding - and listening to the lyrical stories. If I had one minor frustration...it would be some of the writing seemed clouded by adulthood even though it is presented as an observant child's memories. I imagine there was much that was Woodson's own childhood observations as she is truly a gifted writer but I also felt there was also the language of an adult laced in, too. However, this in no way detracts from my love of this book. 50/100 books read in 2018

Serafina and the Black Cloak by Robert Beatty. I enjoyed this fast-paced, and actively engaging book, definitely written, and suitable for 8 -12 year olds, albeit, a bit strangely eerie, other-worldly, and magical. "A brave and unusual girl named Serafina lives secretly in the basement of the grand Biltmore Estate amidst the splendor of the Gilded Age. Serafina's pa, the estate's maintenance man, has warned her to keep herself hidden from the fancy folk who live on the floors above, but when children at the estate start disappearing, Serafina and her friend Braeden Vanderbilt must work together to solve a dark and dangerous mystery."  - Amazon. I think my granddaughter Ella would get a kick out of the book. 51/100 books in 2018.

Glass Houses by Louise Penny. Coming late to the Louise Penny party I picked up all of the Armande Gamache series in paperback thus when the hardback came out for Glass Houses I waited until it came out in paperback. It was an excruciating wait! While not all of the series are 5 Star reads the majority of them are, thus, there was tortuous anticipation as I waited for the much-acclaimed Glass Houses. I so wanted to love Glass Houses. But, I did not in the least. I was, instead, frustrated through the entire book, except for maybe -1/16th of the book and I was so disappointed:(  I'm sure anyone who is reading this will chide me for disliking Penny's latest but this one just didn't live up to most of her other books. I walked away frustrated, feeling like it was anti-climatic, and confused by the entire story line. 52/100 books in 2018.

Digitally, I created a 2-page 6 x 8 for my All About Me album that I am completing this year. I used a combination of Ali Edwards digital product and Paislee Press templates. I love the subtle tones of the teals, turquoise, and golds of the book covers and product.

Stories 2018 | a conversation with Ella 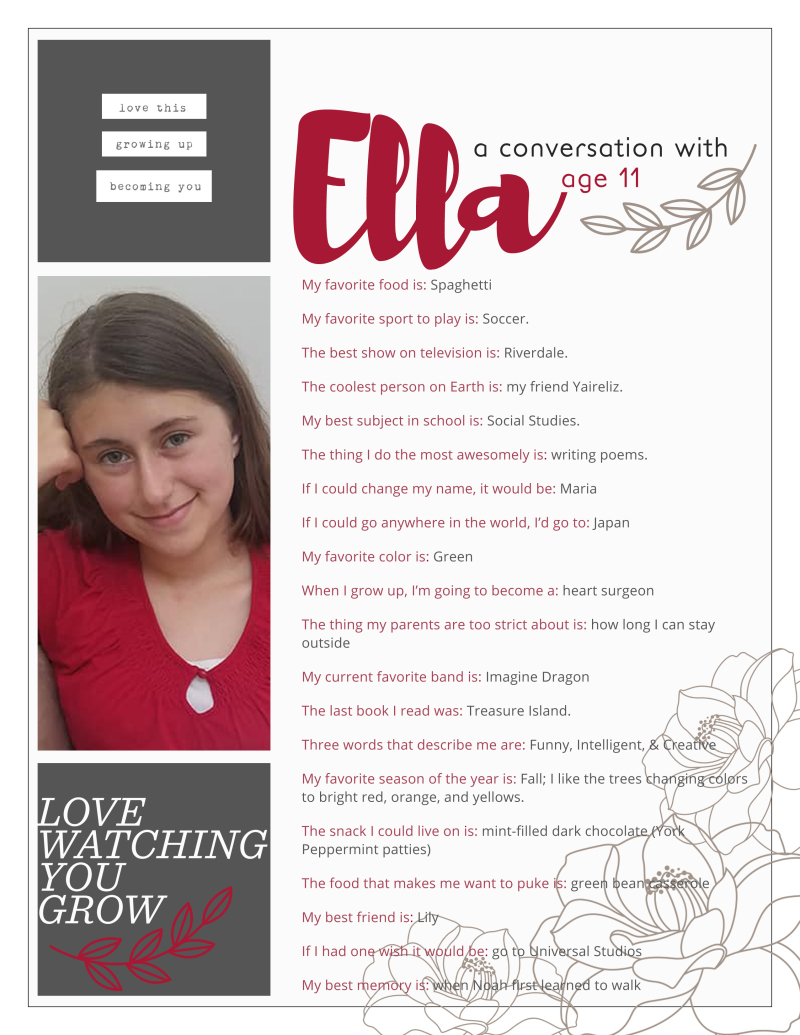 I recently visited my daughter Elizabeth in Maryland who just had my grand baby #6 - Sophia Rose. While I was there I sat down with Ella, my oldest grandchild and the only other granddaughter I have, for a lengthy, enlightening, and fun conversation.

Ella becomes open and expressive when I give her time and attention like this.

I did the same thing several years ago with much the same results: an amazing conversation.

The sameness and the differences that just a few years make are so interesting! 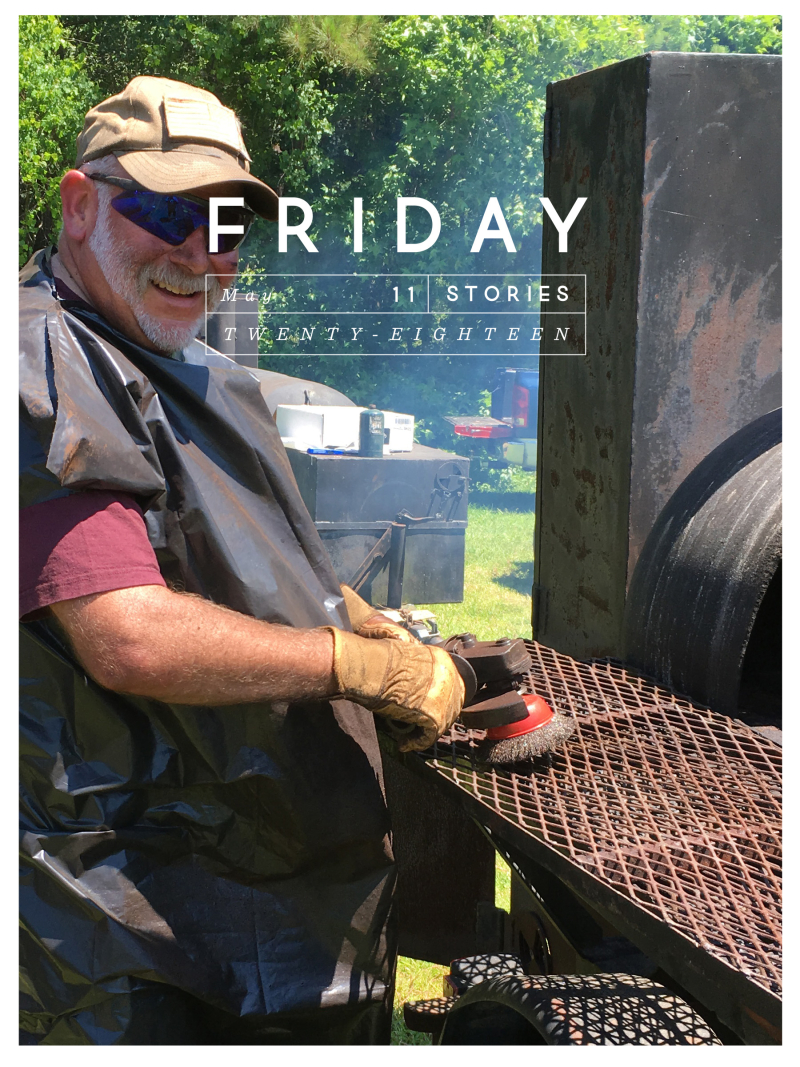 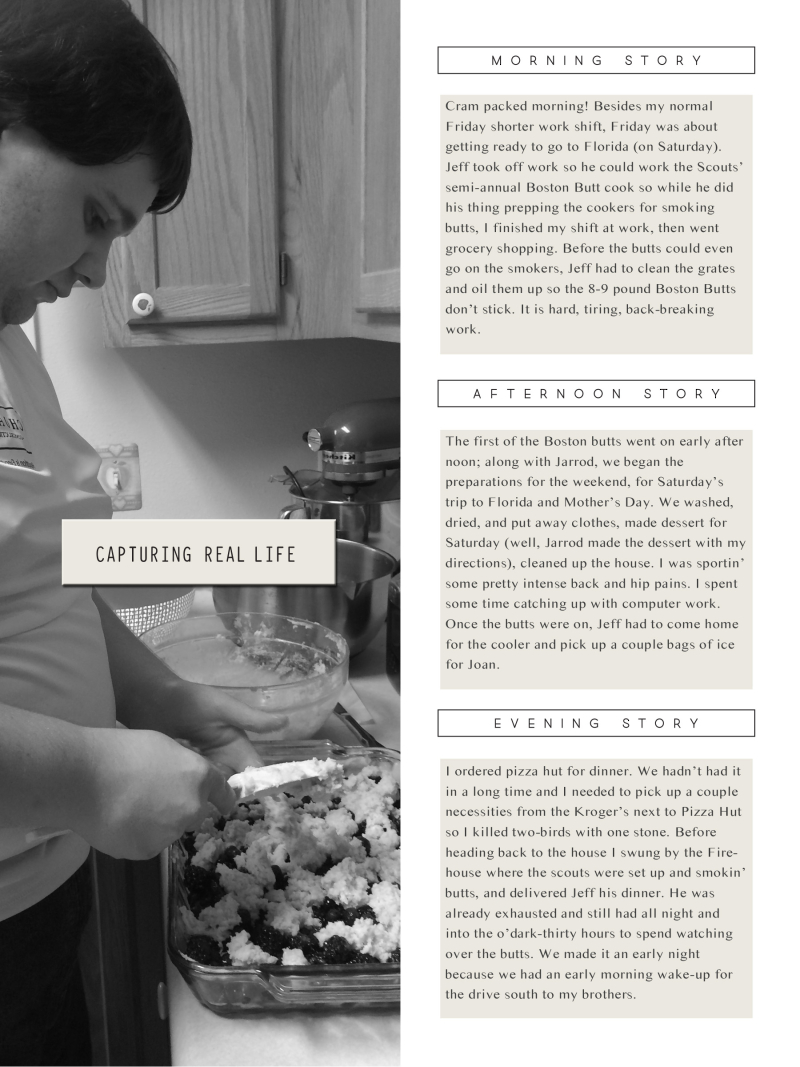 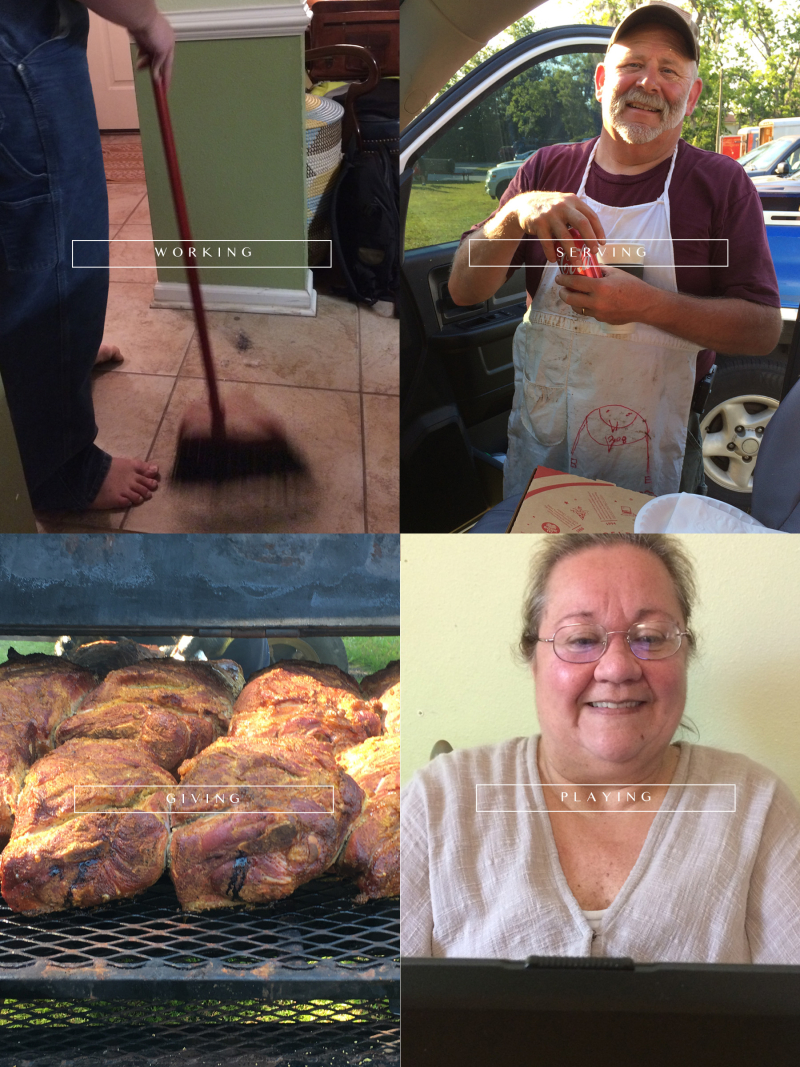 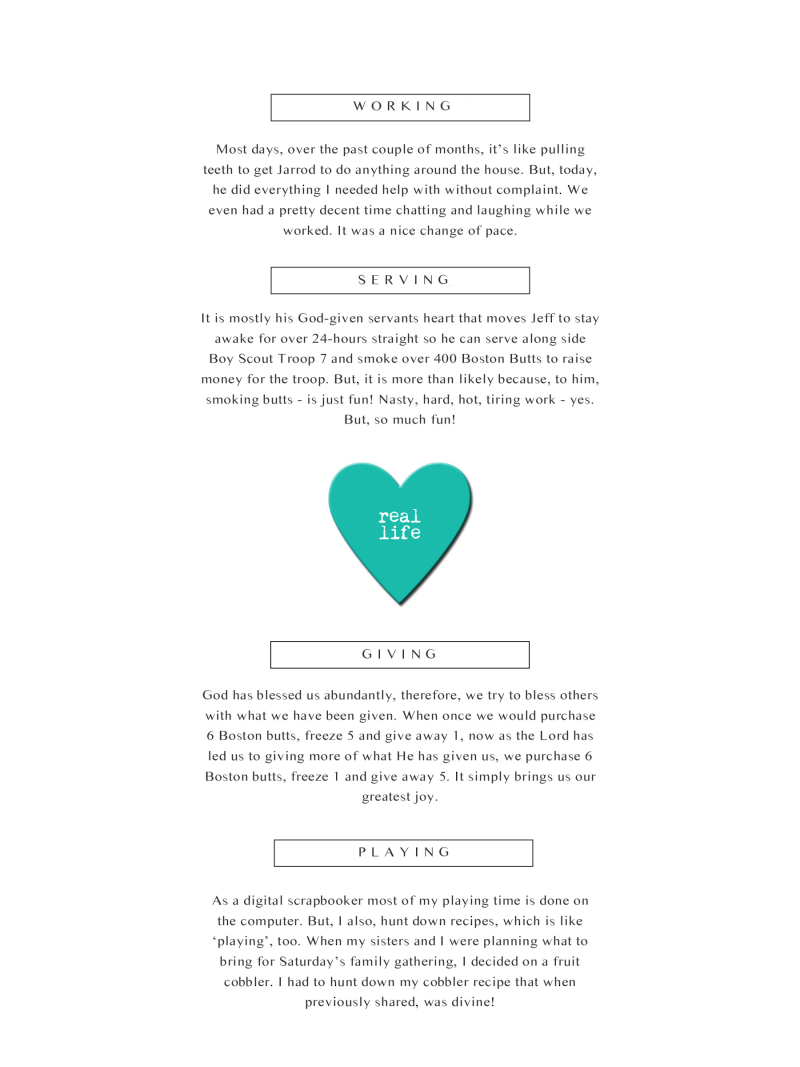 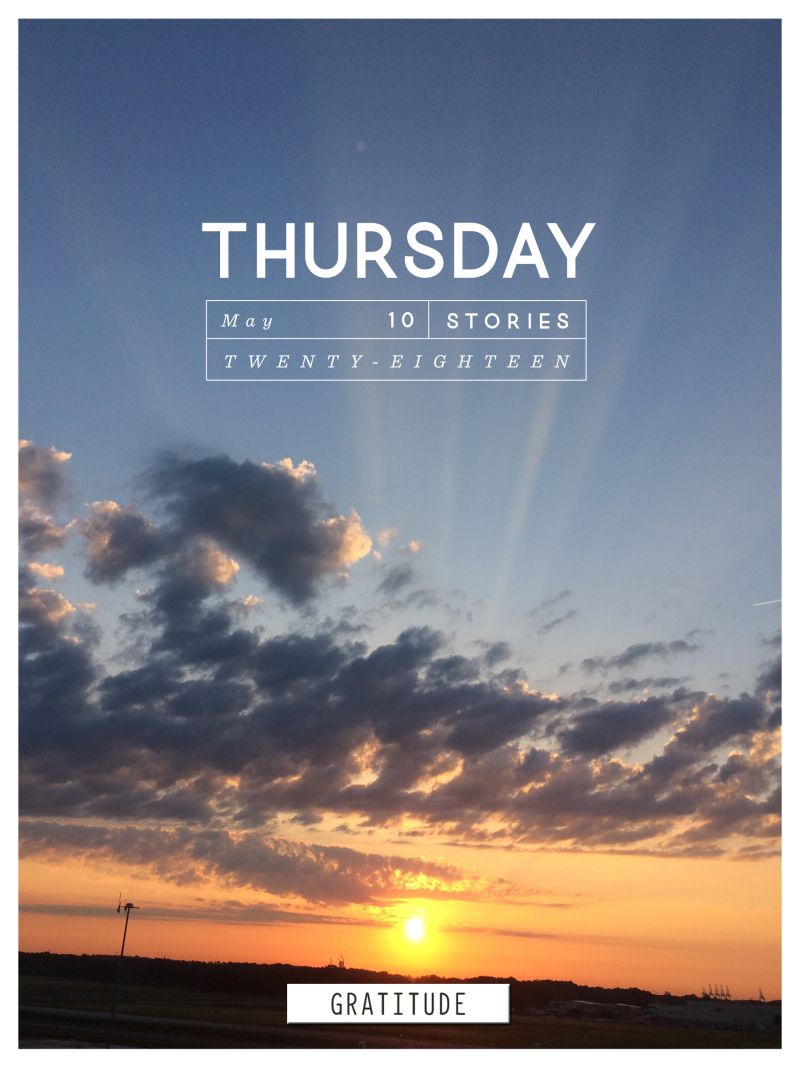 Thursday came and went and I realized at the end of the week that I had one photo for Thursday.

I had a decision to make.

Skip the day. Or, get a little creative. 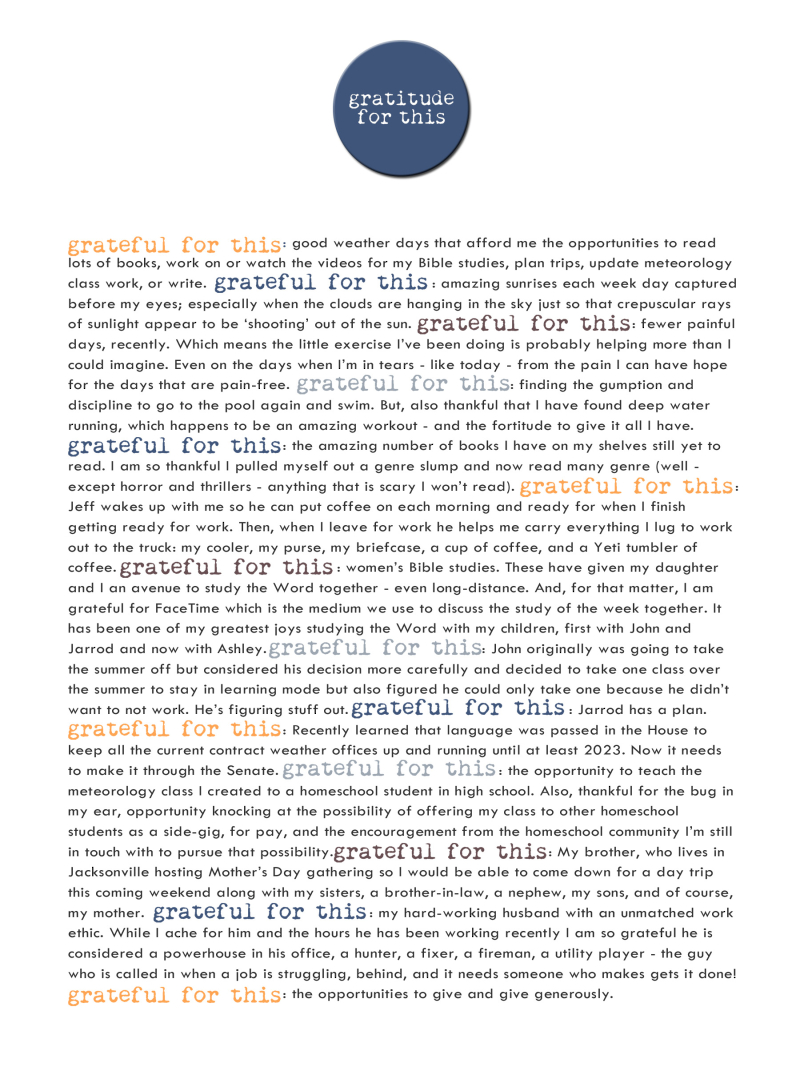 I decided for Thursday expressing my gratitude's was as good as place as any and made even more sense of a photo-less day.

The best way I have found to combat worry or anxiety is gratitude. Gratefulness and giving thanks - to God.

Rather than be anxious over no photos expressing my gratitude's was a wonderful exercise to complete. It shifts the minds gears. It resets our attitude. And, since I am sorely behind in my One Thousand Gifts - well, enough said. 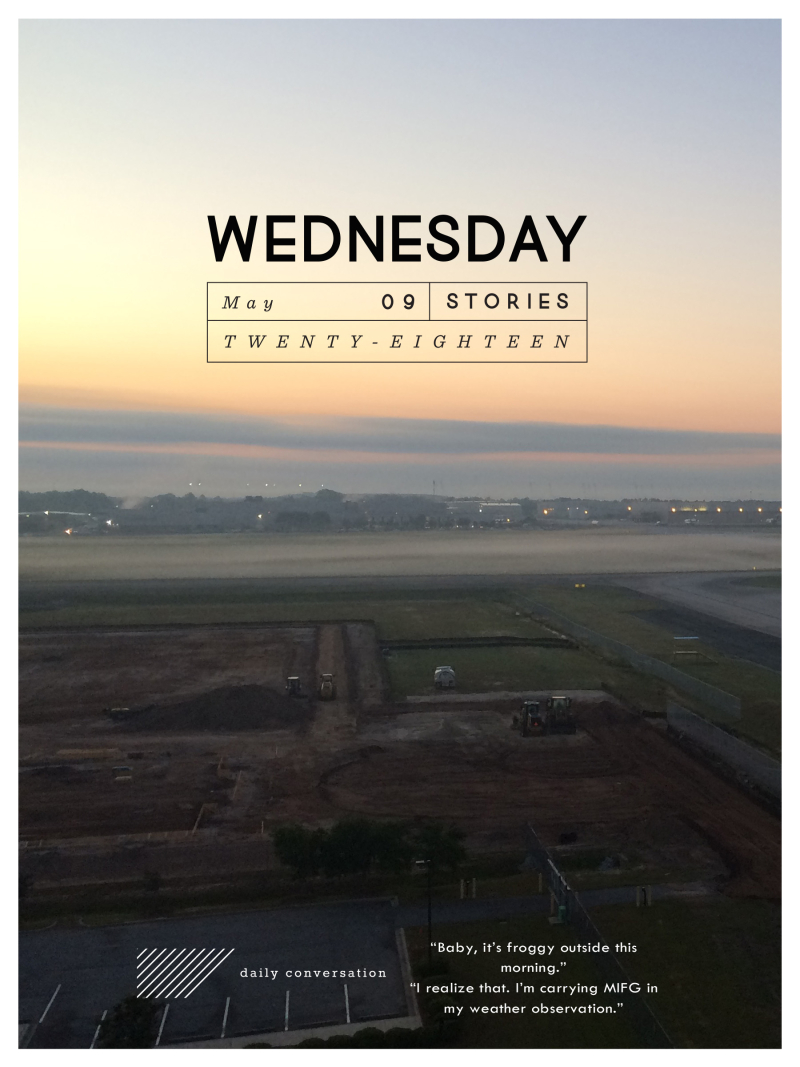 No, I didn't misspell foggy. Jeff sends silly, make me laugh, texts, sometimes it seems with the express purpose of finding an emoji that will suit what he wants to say. He sent this text along with the 'frog' emoji, of course. 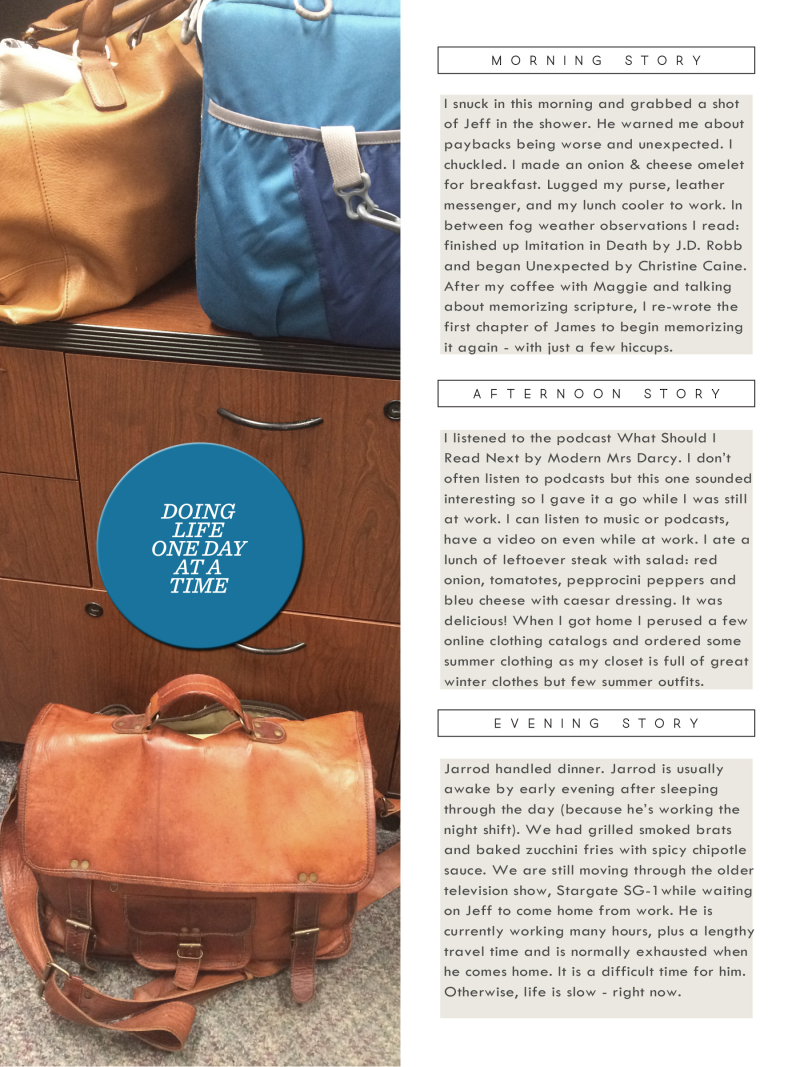 Each day, except for Thursday, I used this Morning, Afternoon, and Evening story template to tell the primary stories of the day. 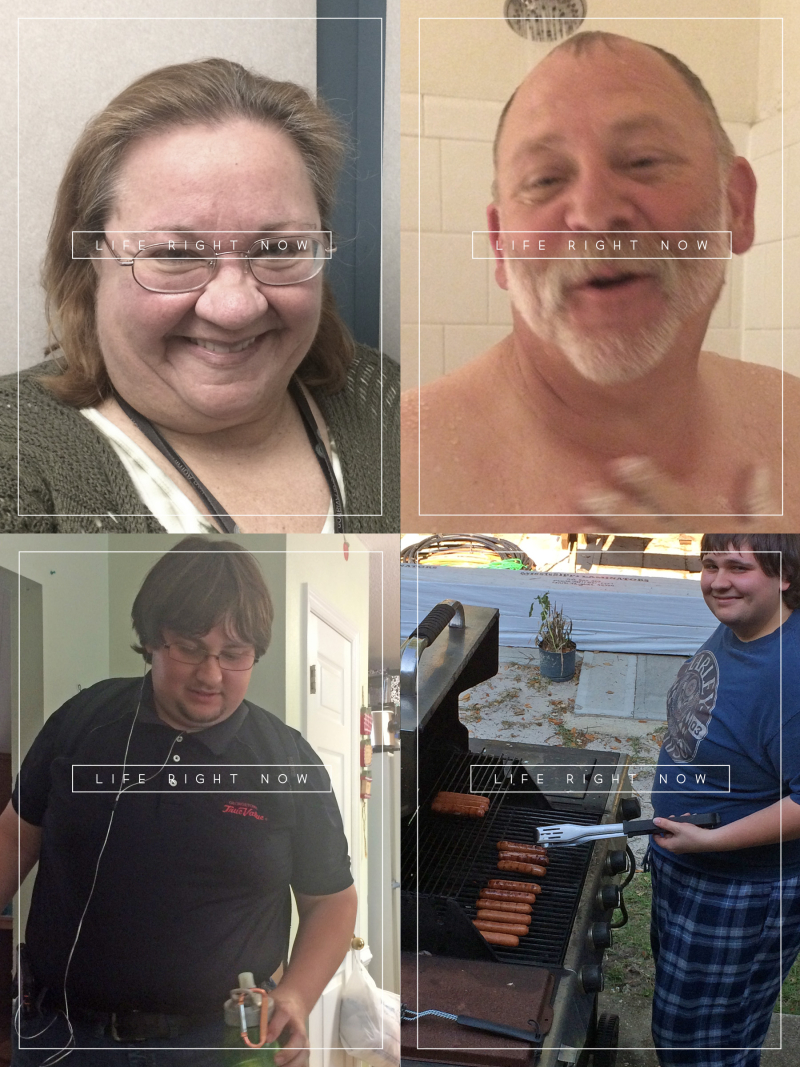 I am a huge fan of present participles (-ing words) and journal prompts such as 'life right now'. I incorporated these into my days of this week. 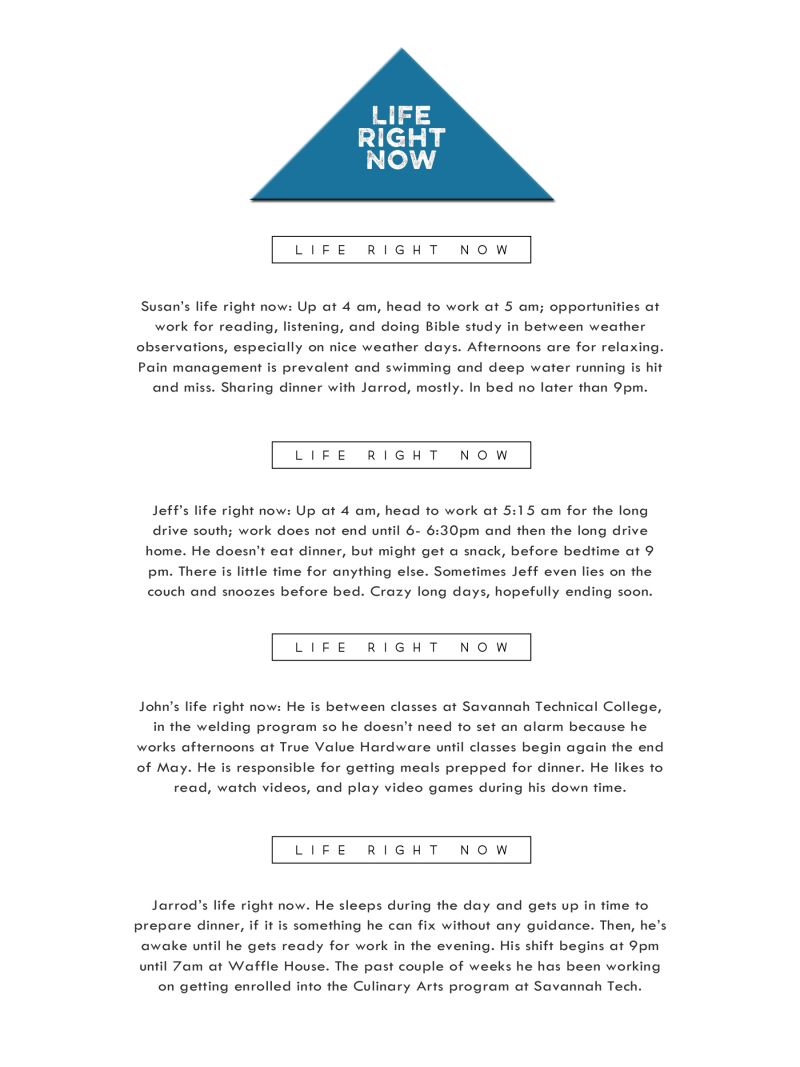 I used the Life Right Now prompt to tell a short update of - well - life right now for each of us. I have been taking an on-going, unintentional break from the blog and even posting to the Facebook pages I am a member of. Truly, I have also scrapped very little. I am not sure what happened. I was putting pages together - and then I wasn't.

Week In The Life waylaid my groove and I need to re-think participating in this 'event', officially, again - or not. It truly is an event in the scrapbooking world. And even though my mostly minimalist style of scrapbooking should make it easy to keep up with it is the discipline of taking photos every day all day for 7 days makes this exercise for me, particularly, a struggle.

That being said. Tuesday's pages are completed. And now here they are - posted as well. 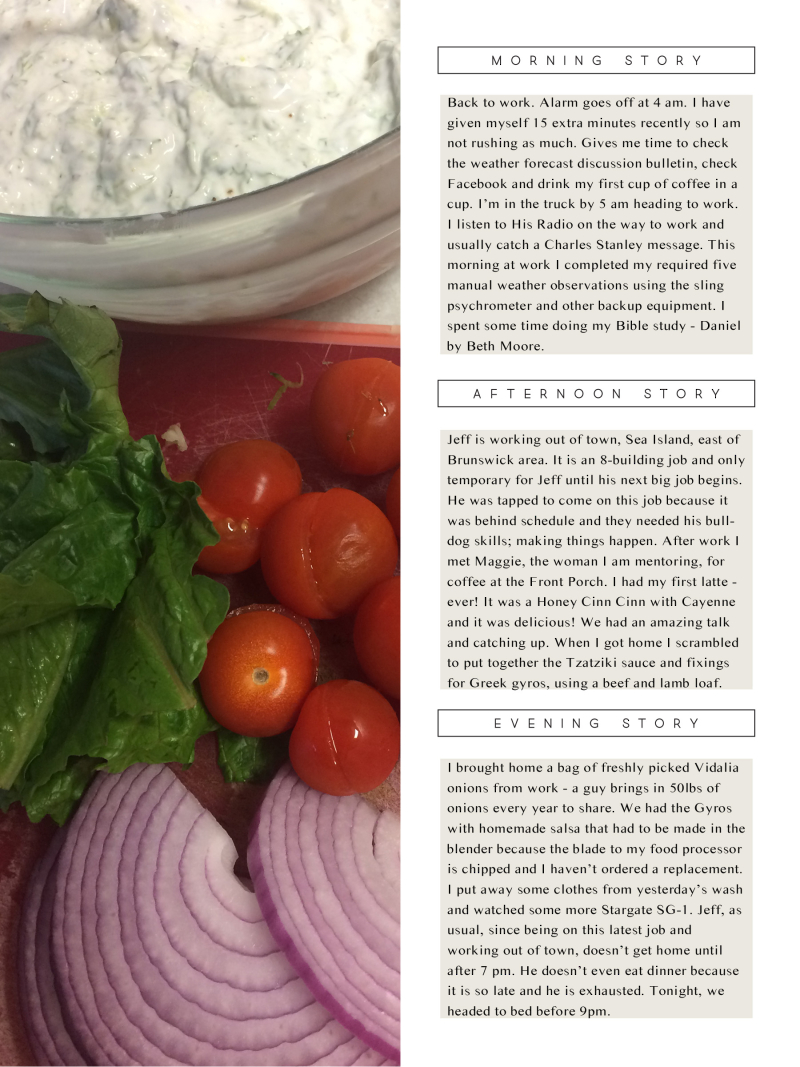 I've read that if you can't put together a 'worthy' blog post then you might as well not.

Today, I am in the middle of grocery list making, washing clothes, cleaning my bathroom which I have to do in spurts because pain levels are intense, grocery shopping, Father's Day gift buying, and an assortment of other things on my to do list.

And, too, posting a couple pages that I've had finished but there has been that whole unintentional blog break thingy. As you read the journaling understand life right now is already different. Even just one month...makes a difference. 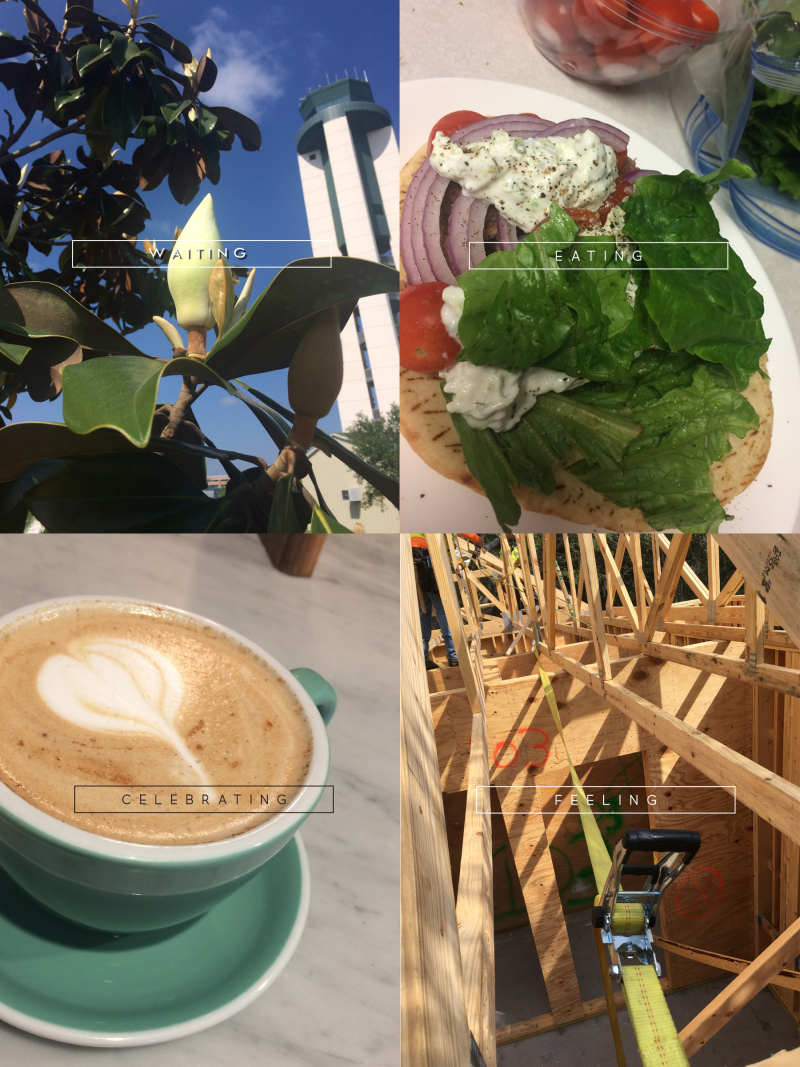 I'm tremendously pleased with the simplicity of these pages and not trying to 'compete' with other scrapbookers' creativity. When I say I am not creative I really mean I am not creative as others. Yet, my creativity is of the clean and simple nature. It is what pleases my eye - mostly. So, I kept these pages all about the photos and the journaling.

Each day of this project I tried to tell more of the story behind the day. This 3 x 8 journal card fits that billet.

And, so, Tuesday is complete.