all about me | past and present 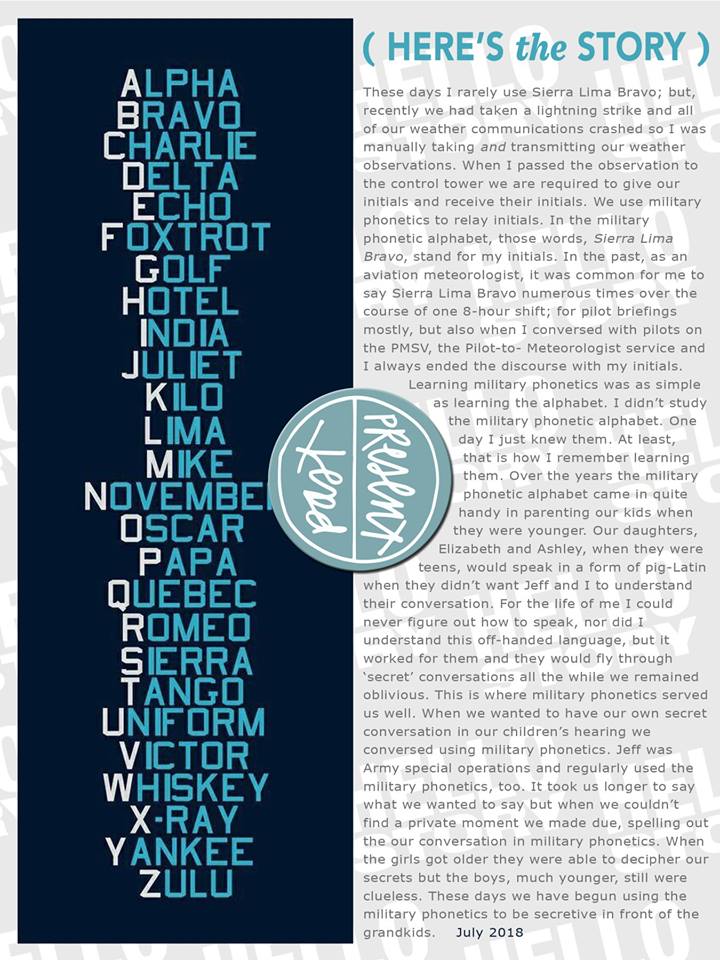 These days I rarely use the terms Sierra Lima Bravo. But, recently at work, we had taken a lightning strike and all our weather communications crashed which meant manually taking and transmitting our weather observations. When I pass the observations to the control tower we're required to also pass on our initials and receive the initials of the controller taking down our observations.

In the past, as an aviation meteorologist is was common for me to relay my initials in military phonetics numerous times on any given shift for pilot weather briefings and when conversing with pilots over the PMSV, the pilot-to-meteorologist service, always ending the discourse with my initials.

The military phonetic alphabet came in handy as parents. I know. "How?" you ask.

Our daughters Elizabeth and Ashley, when they were teens, would speak in a form of pig-Latin when they didn't want Jeff and I to understand their conversation. Maddening! For the life of me I could never figure out their language or what they were saying. It worked for them and they would fly through 'secret' conversations they knew Mom and Dad couldn't understand, with us remaining oblivious to their secrets.

Paybacks can be brutal.

Not that we would EVER consider paying our daughters back.

But, this is where military phonetics came in quite handy.

We still had young boys. Once they learned how to spell we resorted to military phonetics, once again. And, these days we've been known to converse using military phonetics with our kids in front of our grandkids. 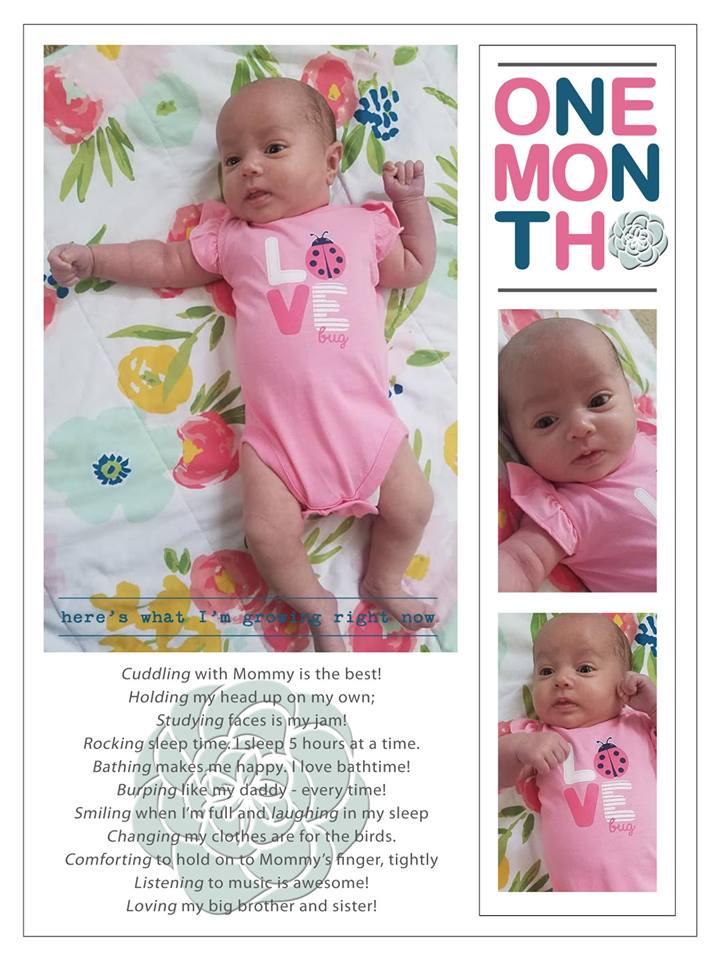 I am hoping Elizabeth will keep us posted on these monthly milestones for Sophia - grandbaby #6 - regularly. I didn't have an album in mind but this was definitely a fun page to put together. This is an outside-of-the- norm, 8.5 x 11 page size (for scrapbooker's this size of page has been around the longest and while I used to scrap this size often I rarely do anymore). Lately, I have been scrapping 6 x 8 almost exclusively with an occasional 12 x 12, but even more recently I realized that sometimes I want bigger.

Isn't she adorbs! I mean my granddaughter. I know. I shifted gears from Sophia to scrapbooking and back to Sophia. Stay with me here.

I turned Elizabeth's list into a present participle (those -ing words) and love how it came out.

Here's to wishing Maryland was a shorter drive...

Maryland is where Elizabeth is stationed and my grandchildren live. Too far away!

Jarrod and I made the drive in June, a couple weeks after Sophia was born, and it was a tough drive up but doable in a day if one begins the day driving and not working then driving. Which, unfortunately, that is what I attempted to do and ended up having to pull in to a hotel and get some sleep before continuing on. 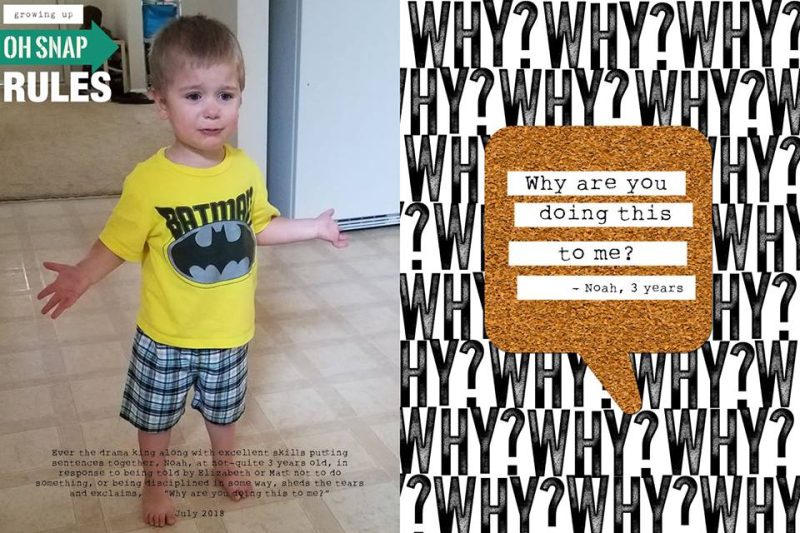 Noah, my three year old grandson, the drama kingpin of the Tisdale household (said with all the love a grandmother could have plus a realist)...and having recently visited Elizabeth...can so see Noah saying these very words with as much dramatic infliction he can muster.

Noah has excellent communications skills and even at 3 is putting full blown sentences together of one quite a bit older. I had several conversations that were in no way adult to 3-year old but more like adult to teenager.

So, when Elizabeth shared Noah's latest cry along with a photo to boot, I most definitely had to scrap the story. You know for posterity sake. I can just hear Noah now.

I'm chuckling even now as I type.

all about me | charleston 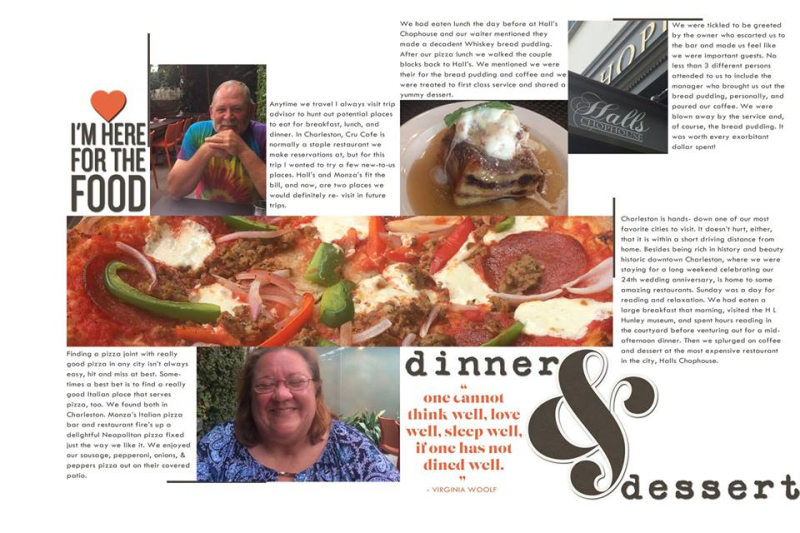 I have been on an unintentional blogging break off and on all summer. It has been nice. I have even drastically culled back on scrapbooking, photo taking and, in general, memory keeping. And I'm not sure why. I just have.

That being said - I am still scrapbooking. Just not so much.

For instance, I have already filled a 6 x 8 album all about me. I recently placed a Persnickety Prints order and received into my hot little hands a plethora of 6 x 8 pages, many of which went into my All About Me album. Beginning in July I will be moving to a second 6 x 8 album for the remainder of this years All About Me pages.

A couple pages recently added are Charleston pages from our May anniversary trip to - Charleston. Rather than a go-go-go trip we made this a truly rest and relaxation trip. It was - amazing! The above - and below - pages are from this trip. 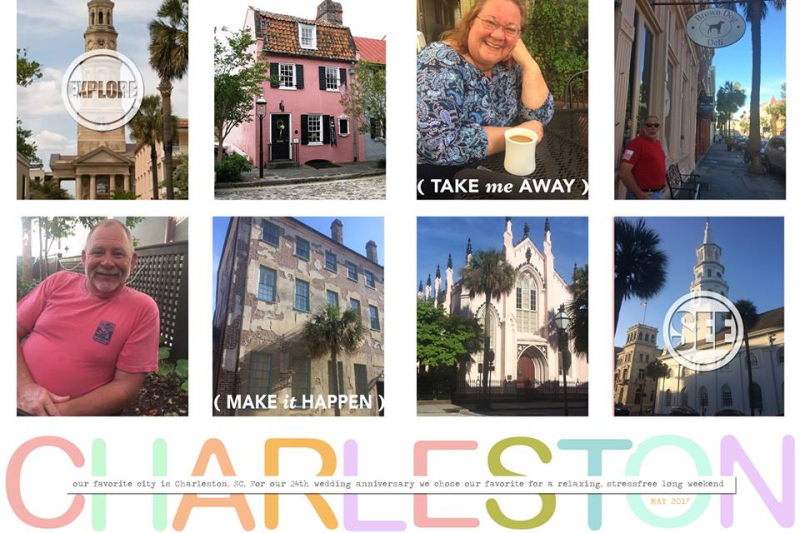 I love this simple 2-page 6 x 8 plus a 3 x 8 journal card. Of course, we took a carriage tour of the city. I could take these all day (although we only took one on this trip) with hopes that we would be on all the different tour routes. Maybe our next trip we'll plan on doing just that.