For the past several years I have participated in Ali Edwards' December Daily project and this year is no different...in that I am participating. What is different is 1) I am using a 4 x 6 album, a much smaller format than I typically create, and 2) I am creating an album using physical product plus digital. Basically, this will be a hybrid project with mixed physical product and printed photos and digitally created pages.

This is a huge step outside my comfort zone as for the last 10+ years I have been memory keeping completely digital (printing all of my created pages as photographs and inserting them into scrapbooking albums. 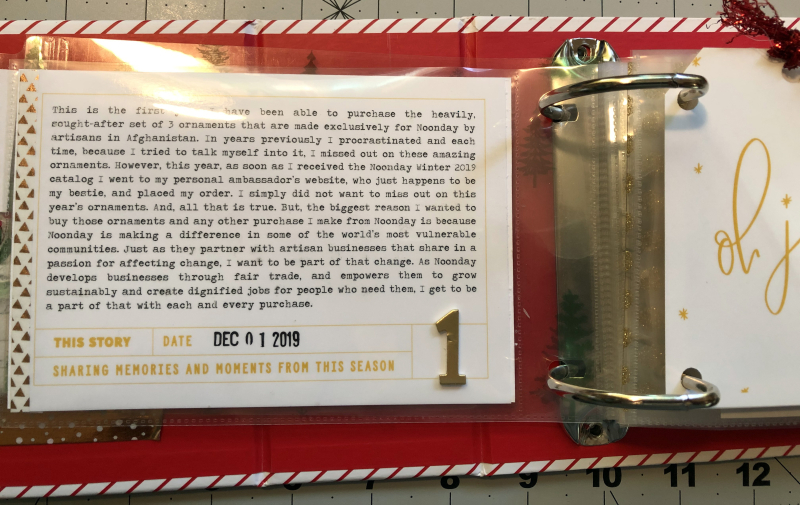 However, I'm jumping in heart first! And, even amidst life's changes and challenges and tears I'm taking back the season and doing what my heart wants. My heart wants to celebrate December.

I intentionally chose 4 x 6 because it was less daunting for this first year doing December Daily traditionally, using physical product. I had such fun receiving the product in the mail over these past several months and begin planning pages with an eye for 'what can I do with physical product?' and 'what is realistic?' 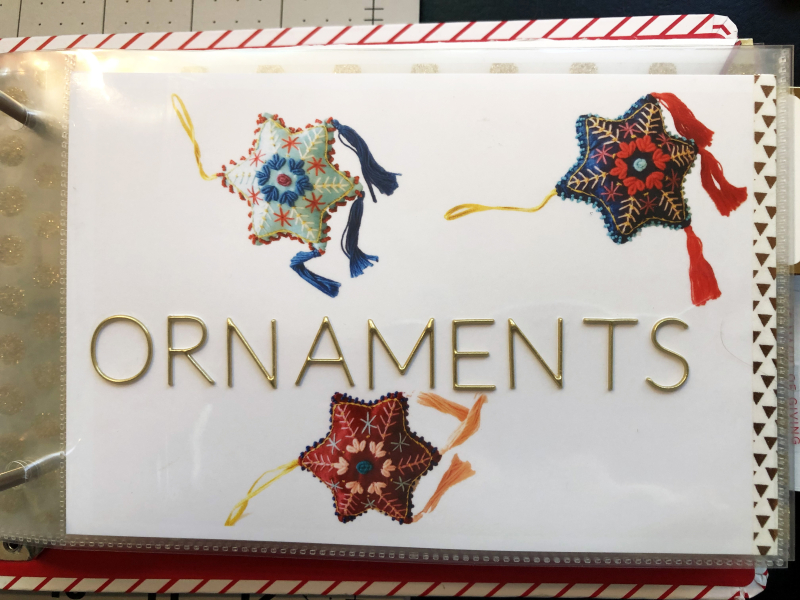 For my first story of December I am telling the story of these Noonday ornaments I've missed out on the past couple of years because I procrastinated but when they were released this year I ordered without hesitation. 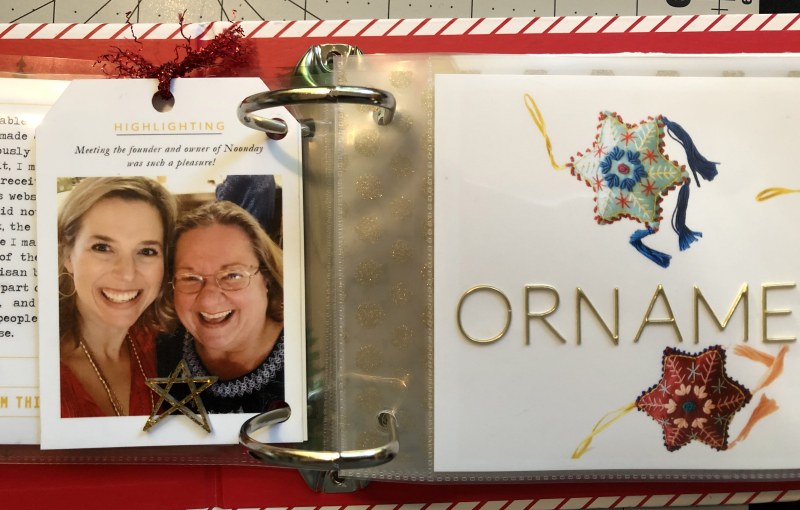 ...and back, because recently I met the founder and owner of Noonday and it was simply a joy to meet her and she is real and a delight.

I love the simplicity of the pages and thrilled with how they turned out. 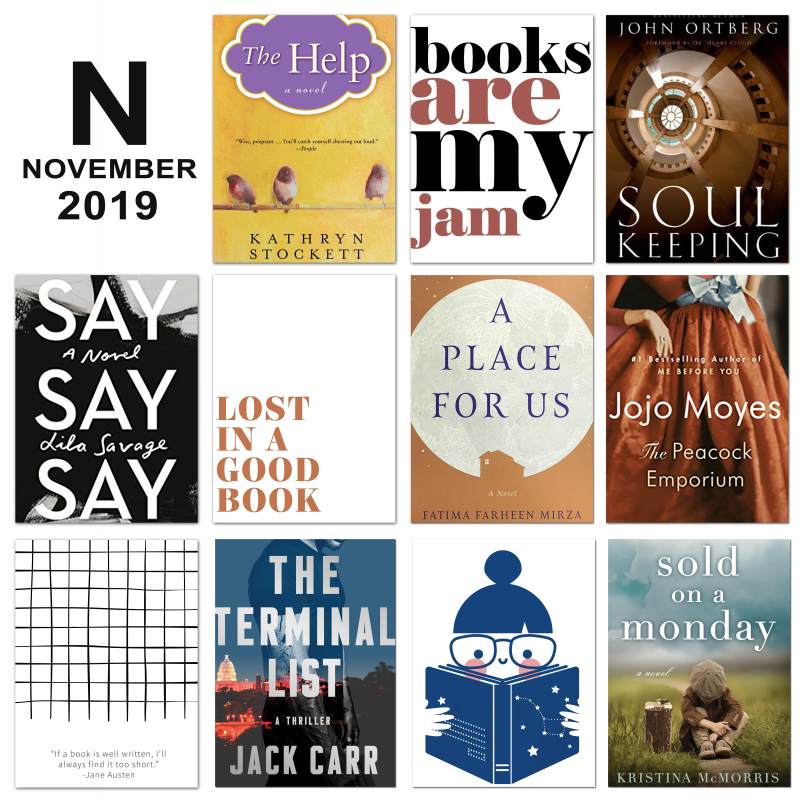 I wrapped up November with three books 'on my nightstand' (she says metaphorically because this girl doesn't read in bed unless hubby is away, which is rare) incomplete because life...

Life threw us a huge curveball and reading was - shelved - for a bit, except for our morning reading so Jeff and I were able to finish Soul Keeping by John Ortberg.

As always, this year, I created pages for my 2019 READ Traveler's Notebook album which I have shared below. 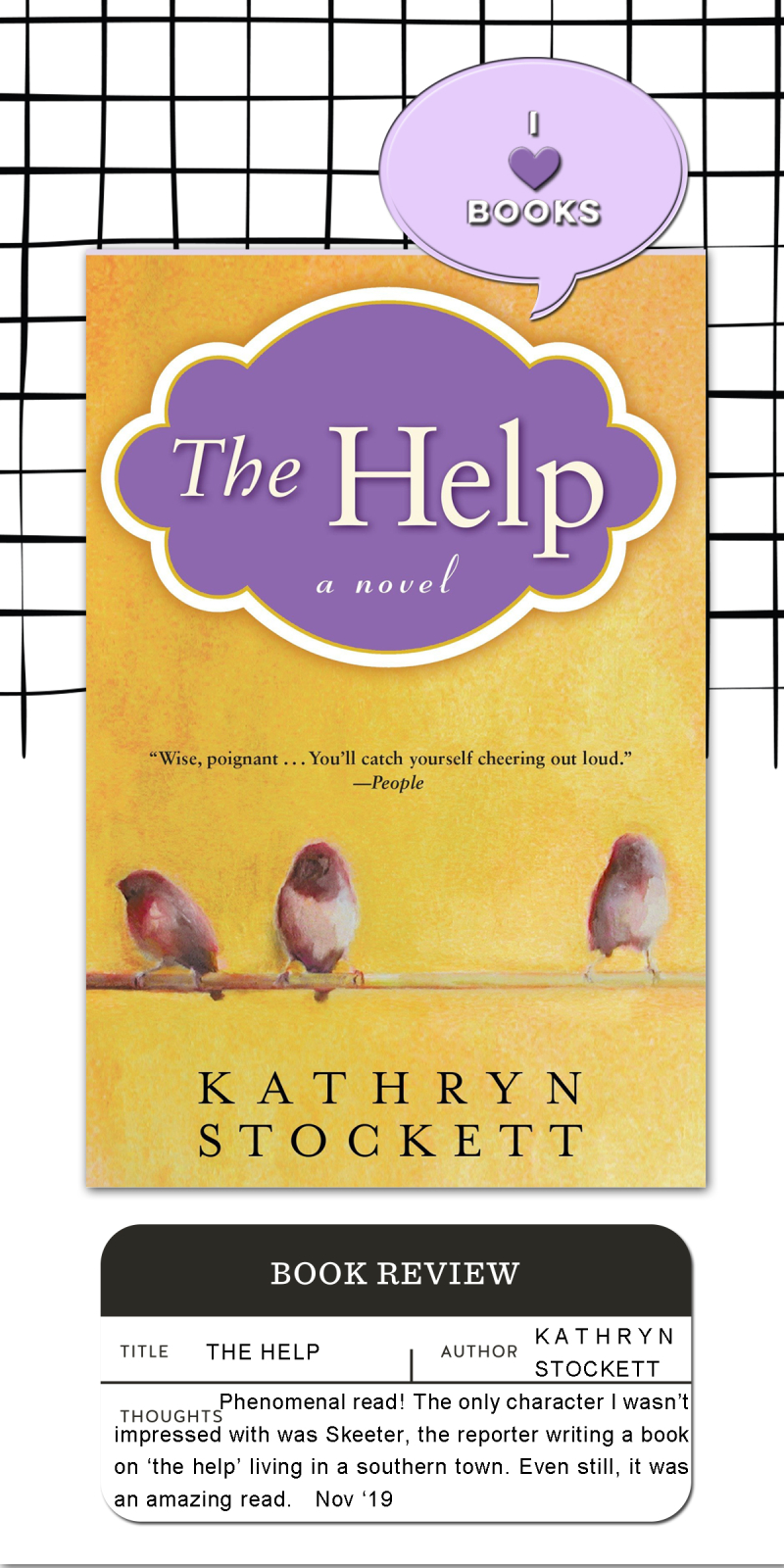 The Help by Kathryn Stockett. Phenomenal with one caveat. Skeeter's character fell flat and lifeless; she lacked - emotion - which I don't see how that was possible but I felt nothing, as if she was feeling nothing. 104/120 A Place For Us by Fatima Farheen Mirza. Difficult to read, yet, it was well-written. Chapters move back and forth, quickly, between present and past, and between family members. Struggled to keep focused at first. Irritated with the characters. Family sagas are definitely not a favorite of mine, mostly because they are so often family dramas, but I hung on and ended up liking the book. 106/120 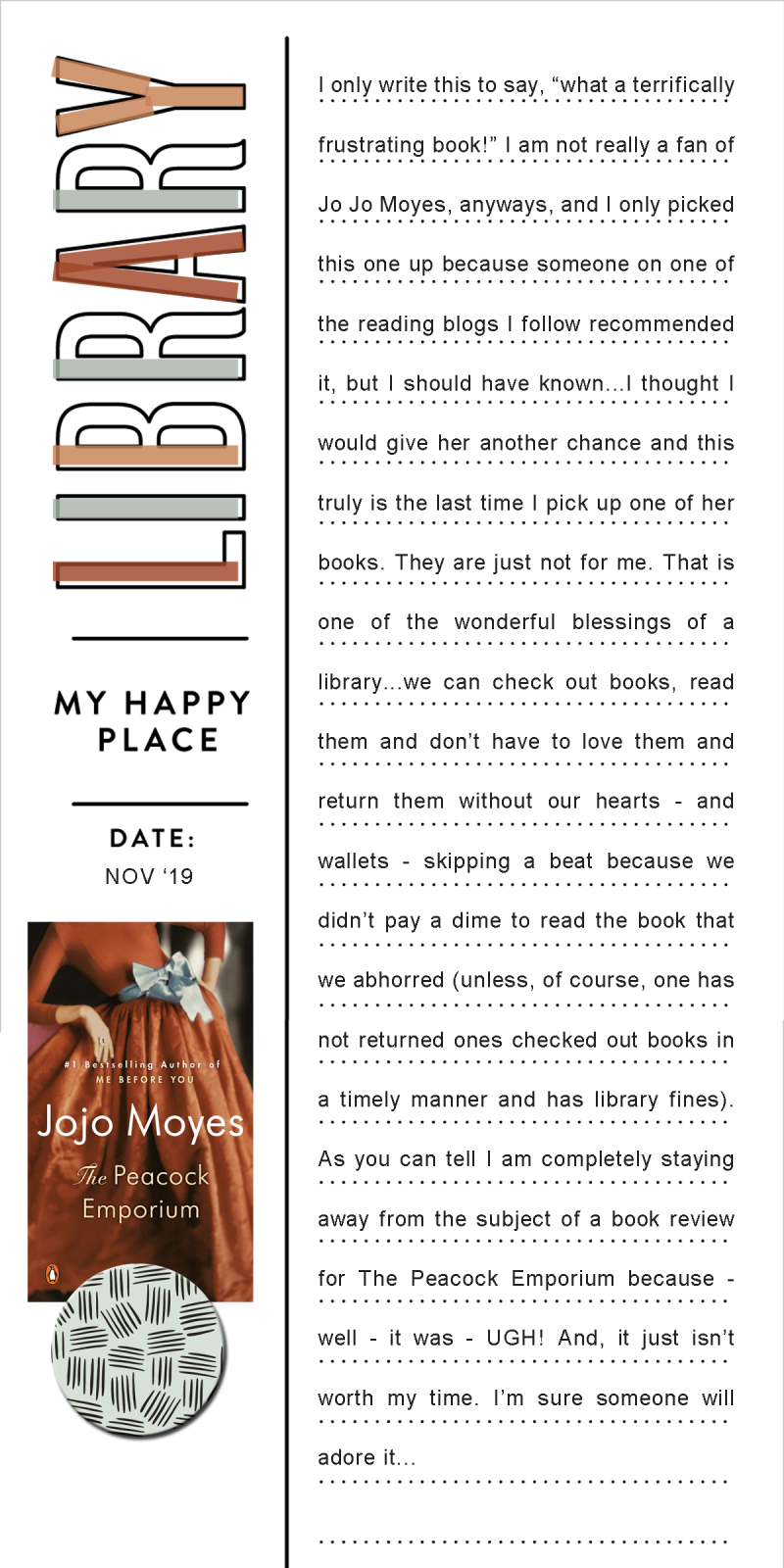 The Peacock Emporium by Jo Jo Moyes. Ugh! Blah, blah, blah! I'm not a huge fan - actually, not a fan - of Moyes books and I should have quit while I was ahead, but I gave it another go. Not going to happen again. 107/120 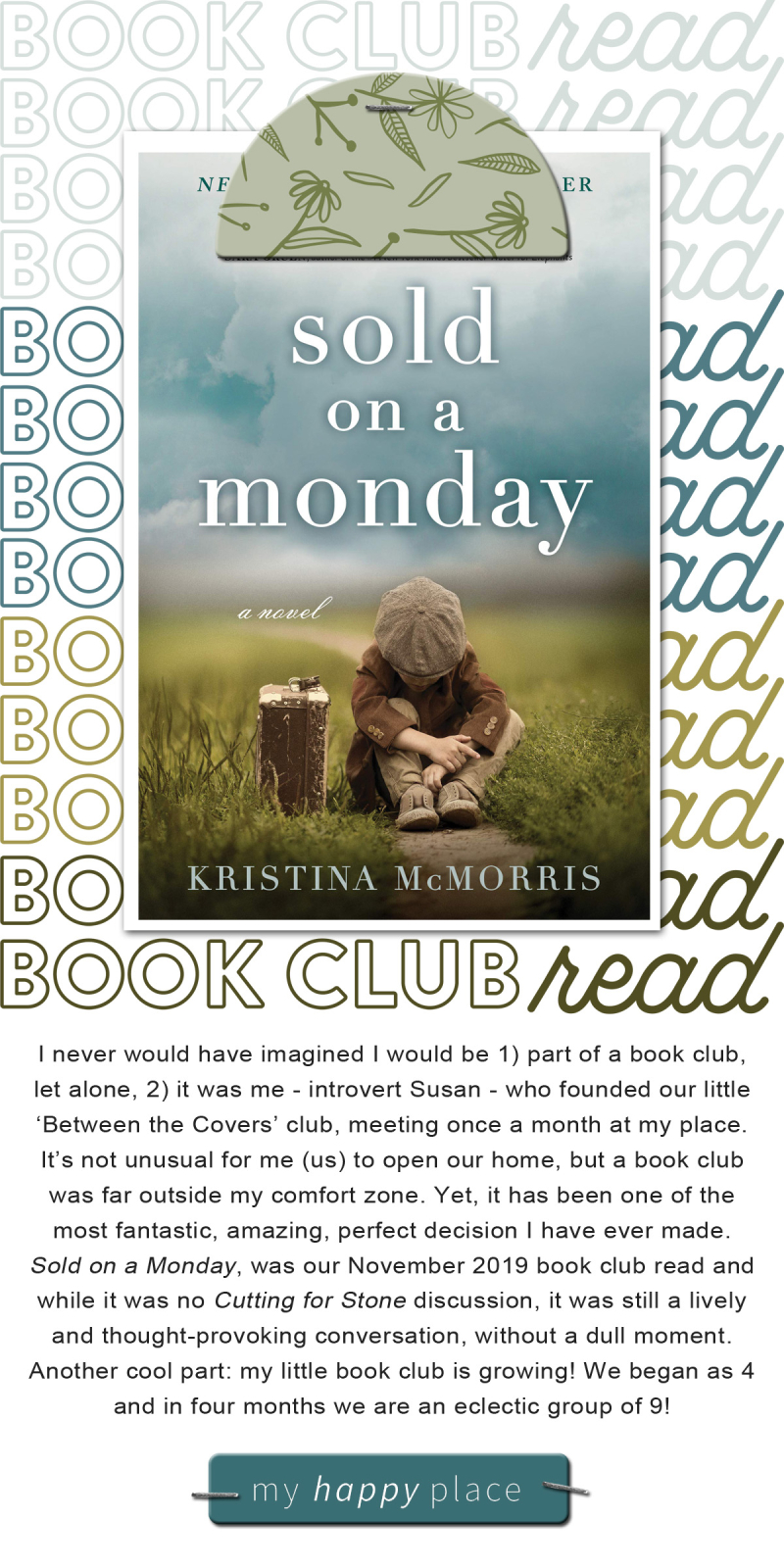 Sold on a Monday by Kristina McMorris. This was my book club's November read. We finished it earlier - thankfully, it was an easy read for everyone - because of the Thanksgiving holidays. I have very mixed feelings about Sold on a Monday. Like I said, it was an easy read but I felt very sophomoric and stilted. There was little character or story development and it felt very choppy. I could have envisioned each piece of the story being an important part of the story if it was tackled differently. People and pieces of the story came out of no where with zero introduction leading up to and it had my head spinning. We did, however, have lively conversation and the premise of the book and its historicity. 108/120

Say Say Say by Lila Savage. The inside cover says the book arrives in sentences of heart-stopping clarity...no, definitely not clarity, challenging, yes but not clarity. I grappled for understanding having to read the sentences, though well-written, several times as they are difficult to understand. But, then, the inside cover also says the book traces unflinchingly the most intimate reaches of a young woman's heart and mind...a riveting story that captures the contours of real life. Saying yes, definitely. The protagonist, Ella's inner life is flayed open, sometimes excruciatingly intimate, and is revealed through her present relationships. On the edges of the pages is a separate look at caregiving, and lesbianism, outside the realm of morality, simply what each look like, often crudely and blatantly, and lived out through the eyes of Ella's life. And, kindness. Ella explores kindness in herself and what it looks like in those around her. Yet, there is also a strange sickness prevalent in Ella's thoughts that is revolting.  All this to say, I can definitely see what captured the attention of the editor and publisher to say yes to Say Say Say. 109/120 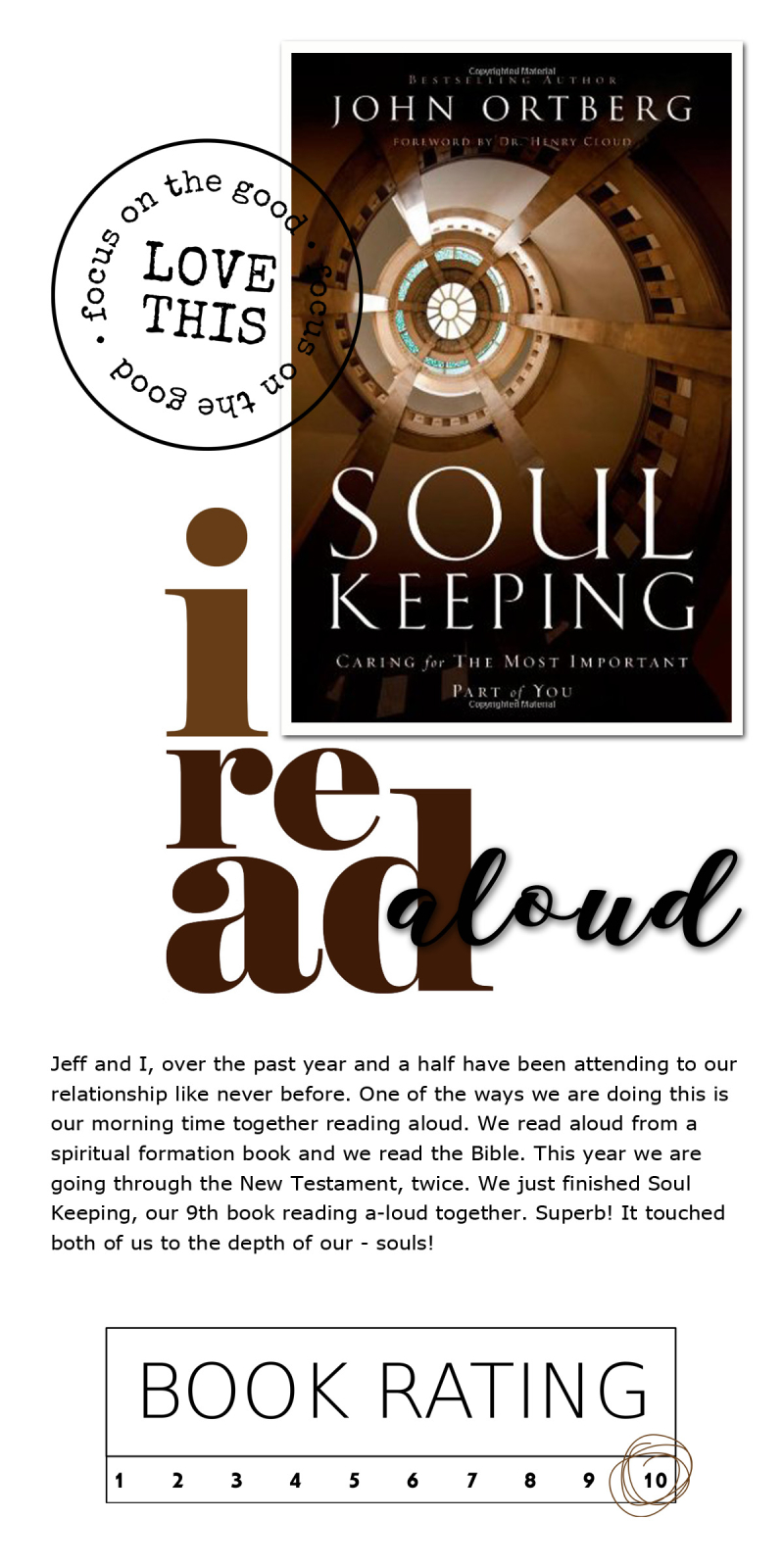 Soul Keeping by John Ortberg. So many take-aways, a plethora of nuggets of gold to ponder and stand on. One thing was affirmed: we are pressing on in our relationship, setting aside our hurt and, instead of giving up, growing our relationship. And, it is in keeping the soul healthy - as a necessity - for the rest of ourselves - to thrive. 110/120.