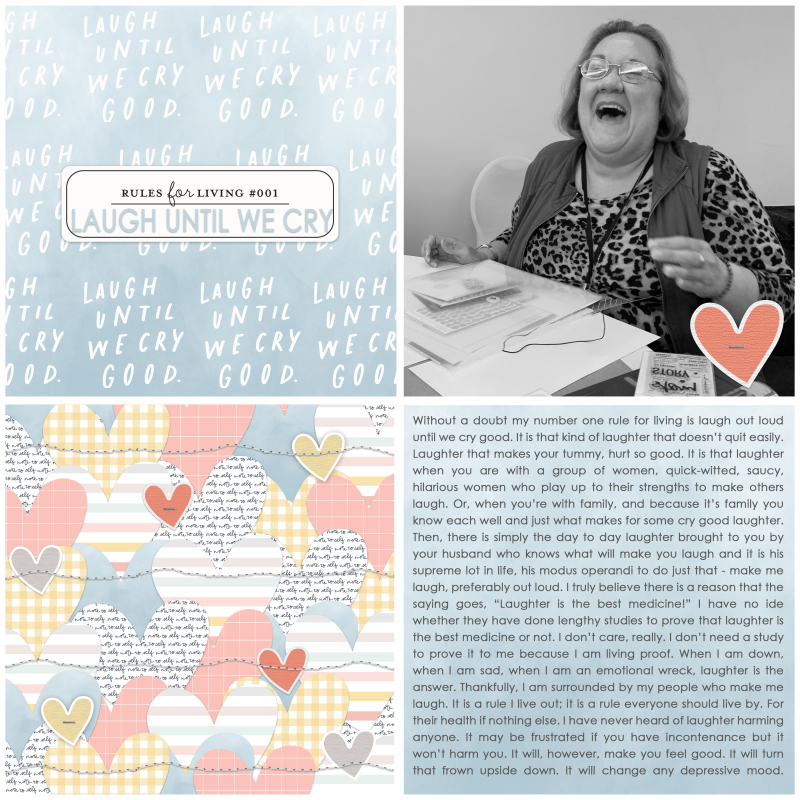 I am starting a new page series called Rules for Living. I got the idea from Ali Edwards' Hello Story class that I took, probably 8 years ago now. It was a 12-week class and it was and still is the most phenomenal scrapbooking class I have ever taken. I measure every class by that Hello Story class. One of the lessons, on ways we can tell our stories, was rules for living.

It's a pretty sight - and feeling.

Then, there is all the other laughter that hurts so good. Truly, laughing is my favorite thing to do.

I loved putting this digital page together. However, I would love to re-create it traditionally just to see how it turns out. Even if I don't I love that I have recorded this first in a series, rules for living. 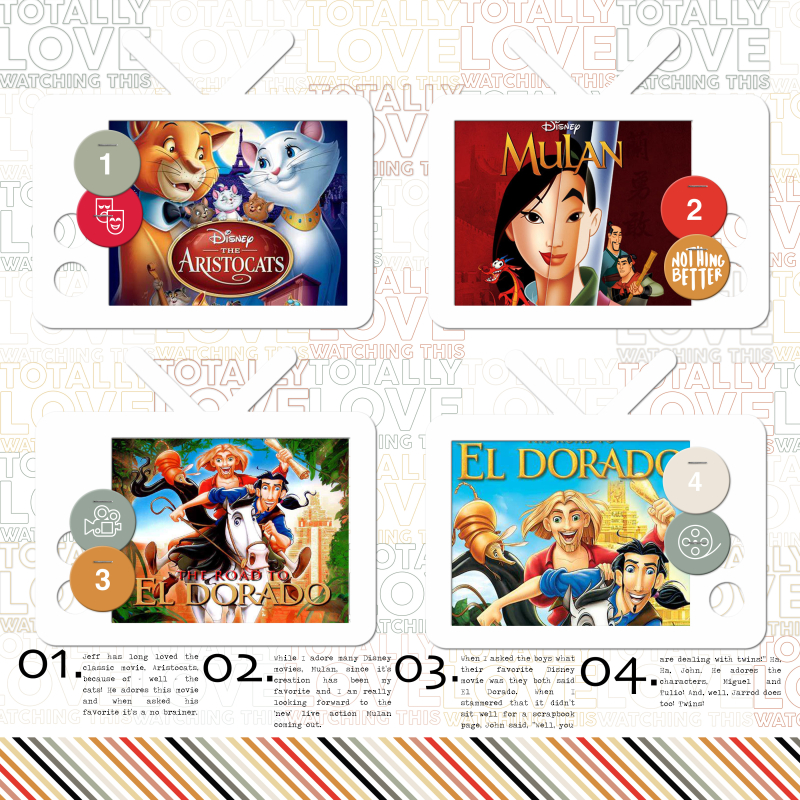 On the Craft the Story Facebook group and on Instagram via #storykitcrush a couple ladies on Ali Edwards' design team initiated a #storykitcrush challenge to 1) get stories told, and 2) use their Story kits (by Ali Edwards) stash. Ali Edwards has been creating story kits for about 50 months now which means 50 story kits based off one word.

For this page I used the Story kit WATCH to create a page and tell a story about our favorite Disney movies. My favorite has long been Mulan. I think it is because Mulan is strong in a man's world, daring, yet, not fearful but fearless. She gets down to business.

I found it hilarious that both John and Jarrod's favorite Disney movie is El Dorado. They both shared with me that the characters remind them of themselves.

Jeff's favorite is a classic, the Aristocats - because, well, it's about cats and he is totally a cat person. 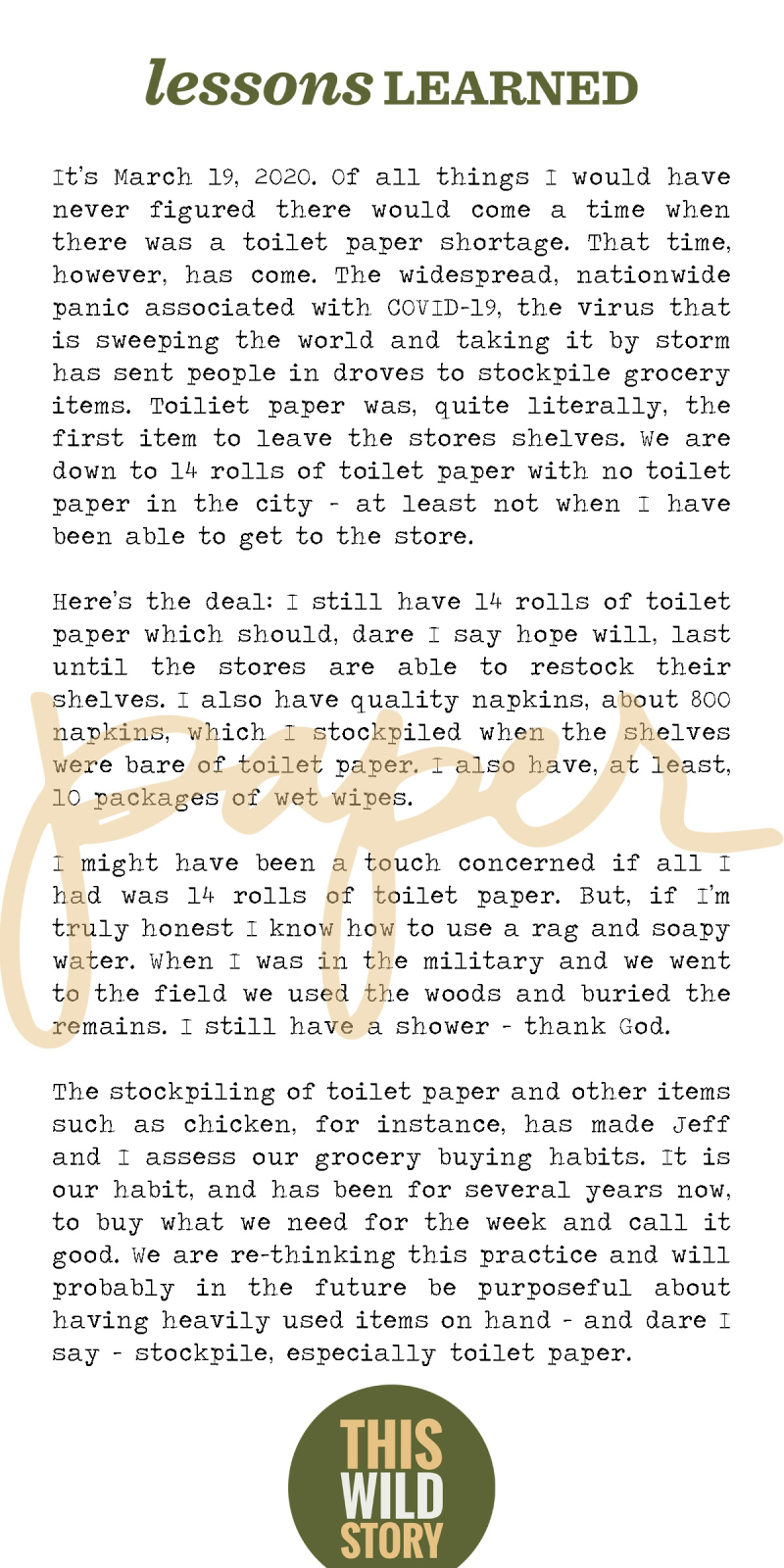 You've probably noticed these one-page pages I've been posted recently with a one-word title. I subscribe to Ali Edwards' Just Write subscription and receive two, one-word prompts each month with journaling ideas to get you started to - writing. Sometimes I follow Ali's suggestions and other times I go my own way. Sometimes, I am journaling about what is currently happening in my life and sometimes I am digging back into my life, and telling those stories that maybe I have never told. I'm telling my story through these prompts, and - well - through all the other pages I have created.

I write because 'I will either walk inside my own story or stand outside my story and hustle for my worthiness.'  -  Brené Brown

'My life is my story; write it well, edit it often.'

With every story I am finding my story telling voice.

Today, I am sharing the story prompt: heart. 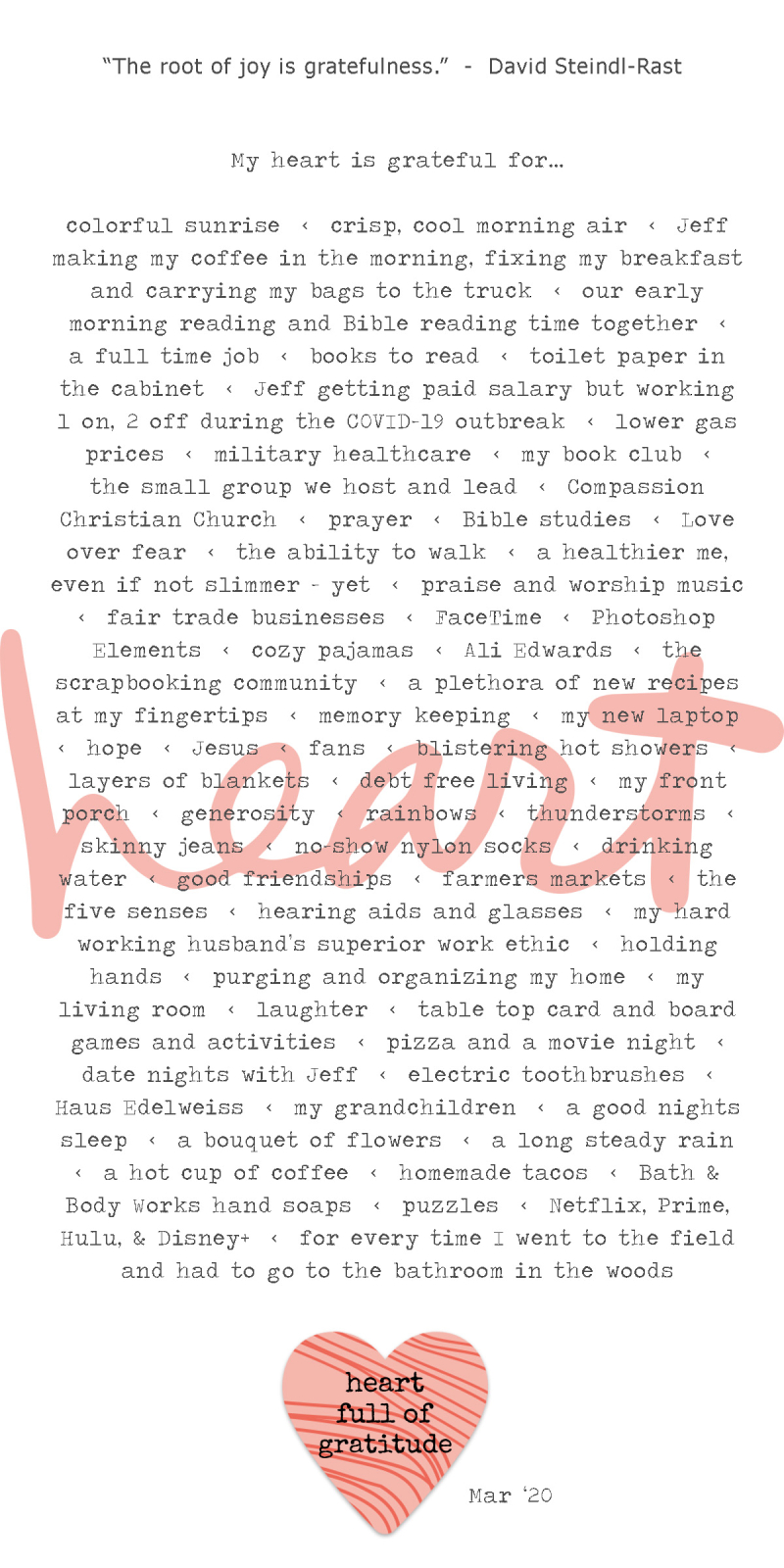 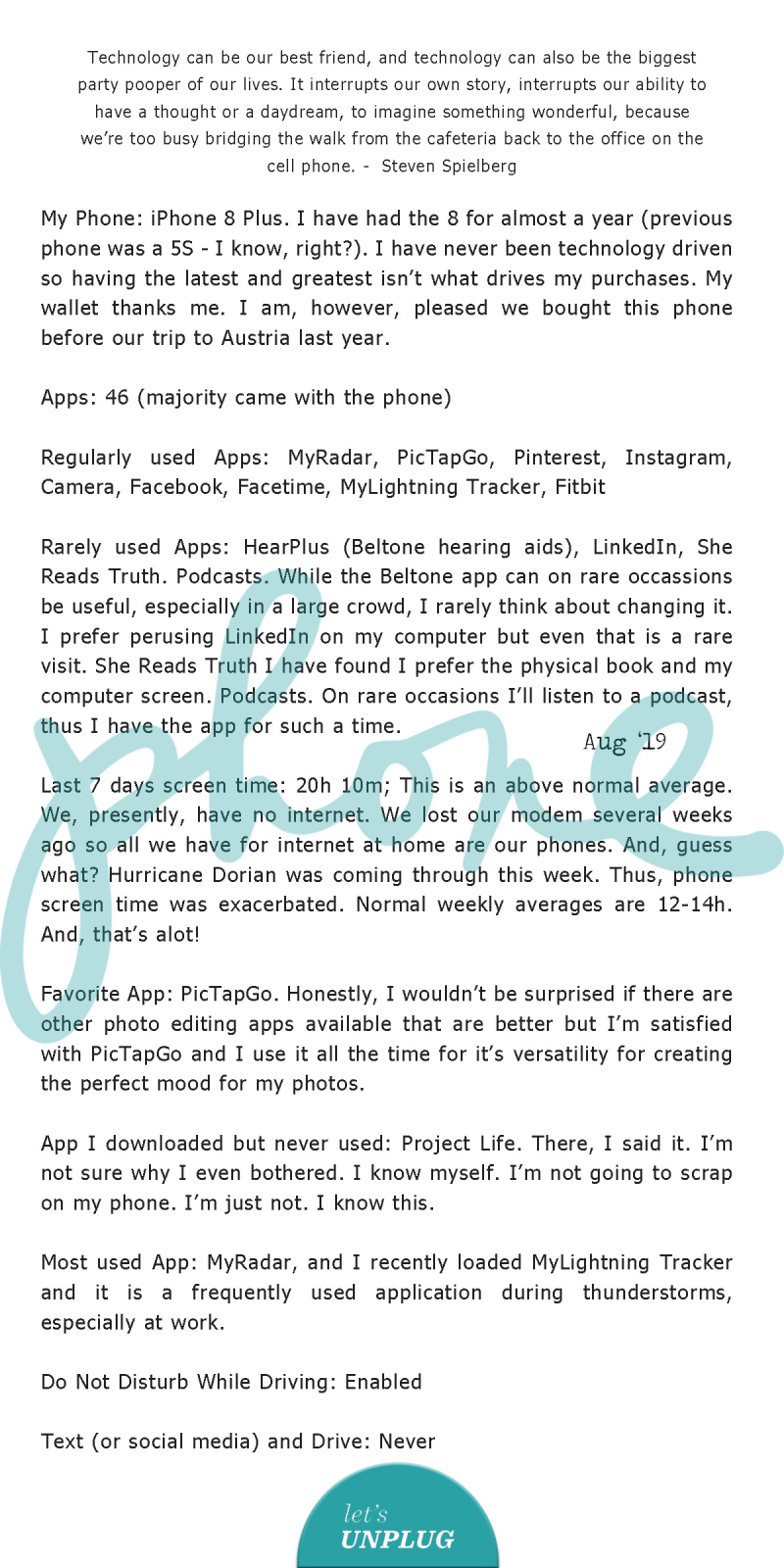 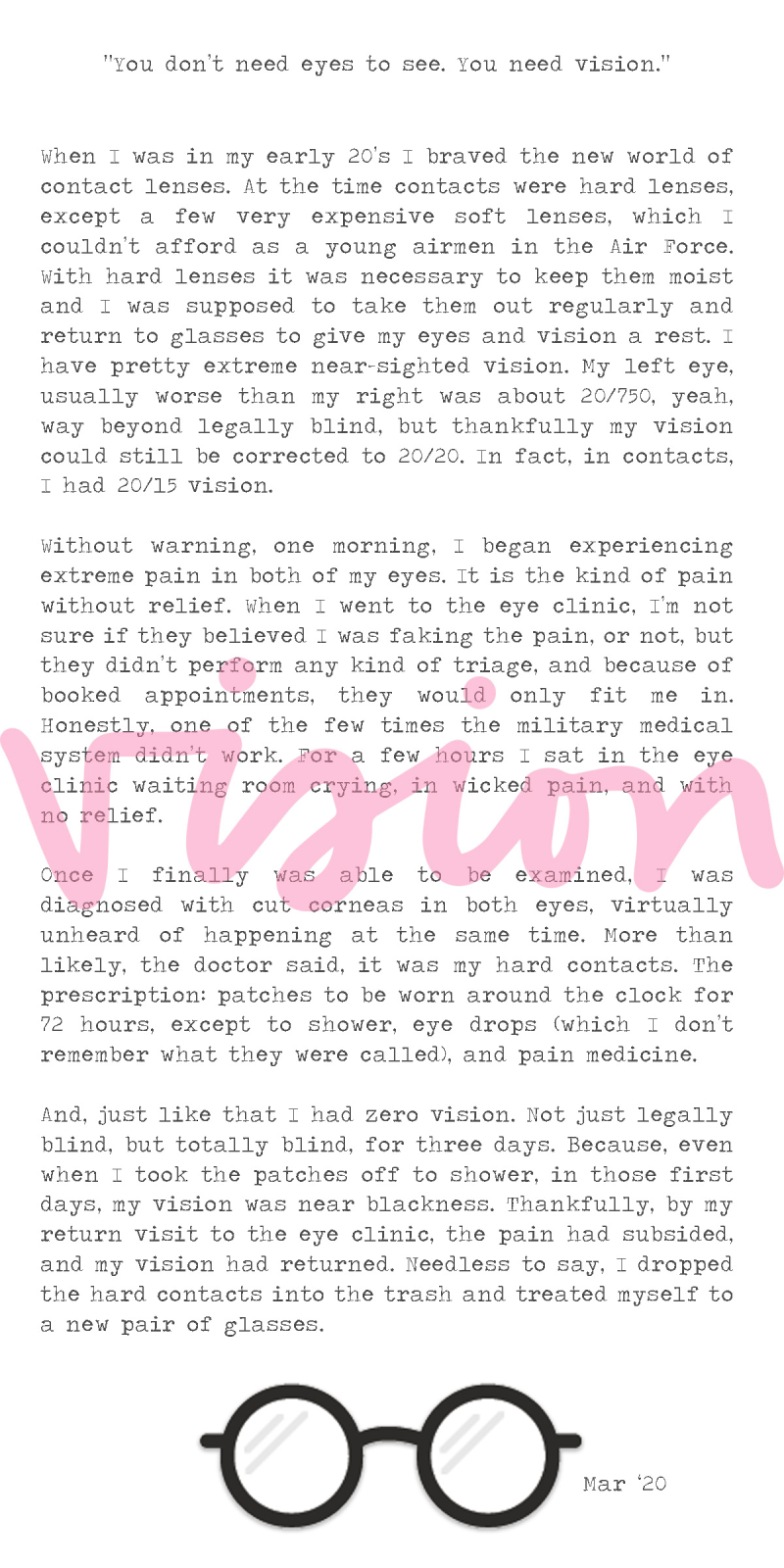 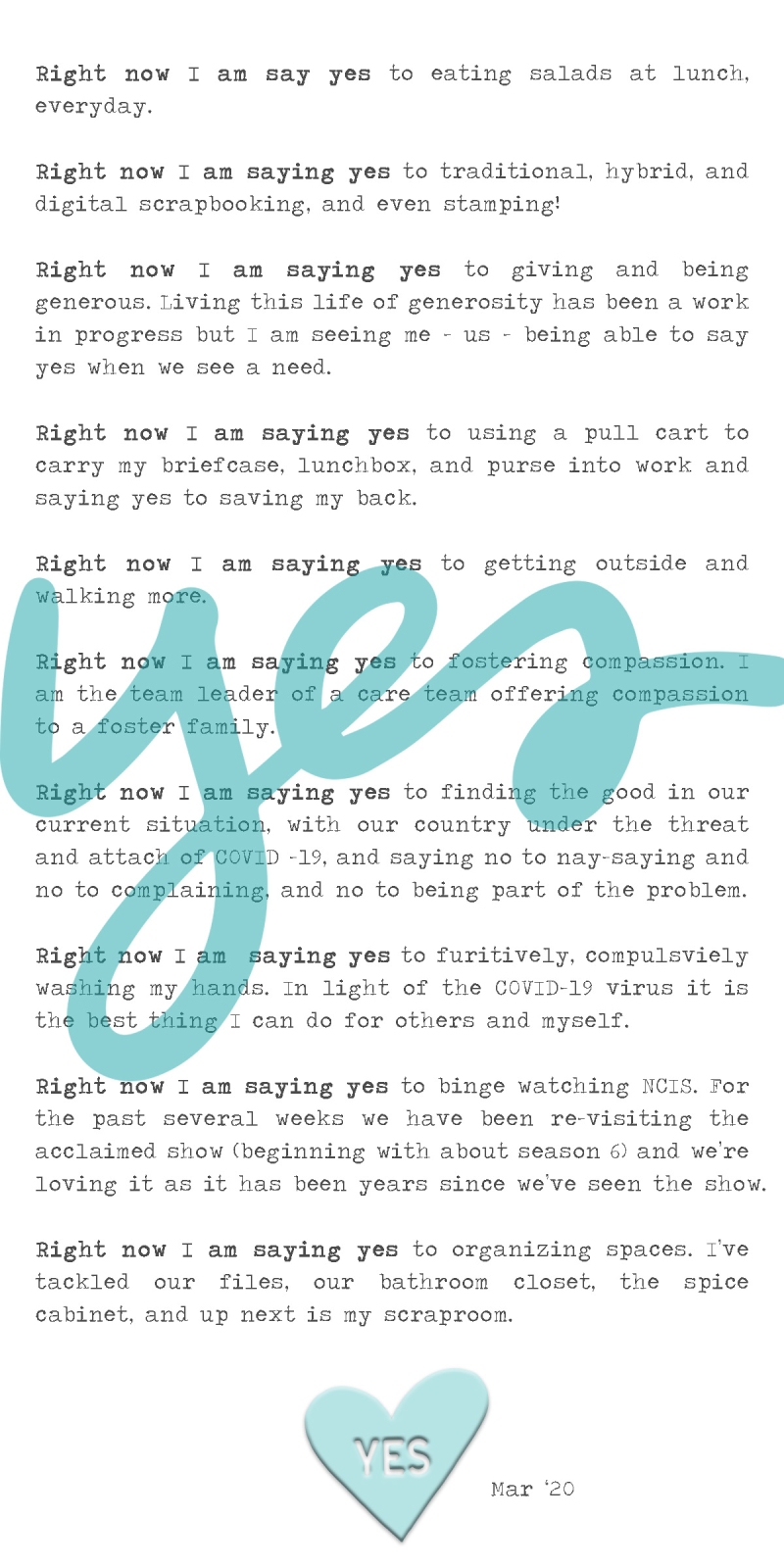 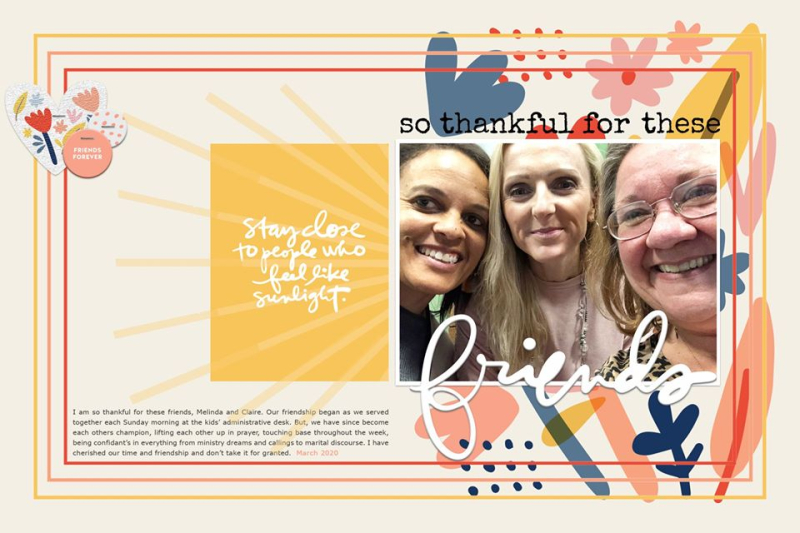 I have always had a lot of friends but never really close friends, as in best friends. I still don't really. I have always wondered if it is me, my introvertness, or if it is something else altogether. The phrase you have to be a friend to have a friend has always struck me as something I furiously assess. Right now I have two girl friends who I met through church, who are probably my closest friends right now.

We are each other's confidants for everything relational, personal and spiritual. They are both younger than me and in different life seasons yet we get along so well and who I've had the most connection with in a long time. While we, generally, only see each other about once a week we are communicating most regularly throughout the week. What I also appreciate with these two friends is they both offer differing levels, and kinds, of kinship. Over the years I have figured out that no one person can be everything for us. And, that it is most often, the many, that can fill in the pieces of friendship we as a people need.

I have moved in to an age that - well, in reality - has been for many years - my friendships are heavy mentorship friendships. Where women are like daughters, even. It's a beautiful relationship. I believe even those types of friendships fill a need. They fill the need in me to nurture.

Anyways, I created a page on Friends, of my two current, closest friends using Ali Edwards' Story kit FRIENDS and using the digital kit (because the physical product has arrived yet). I adore how it turned out. 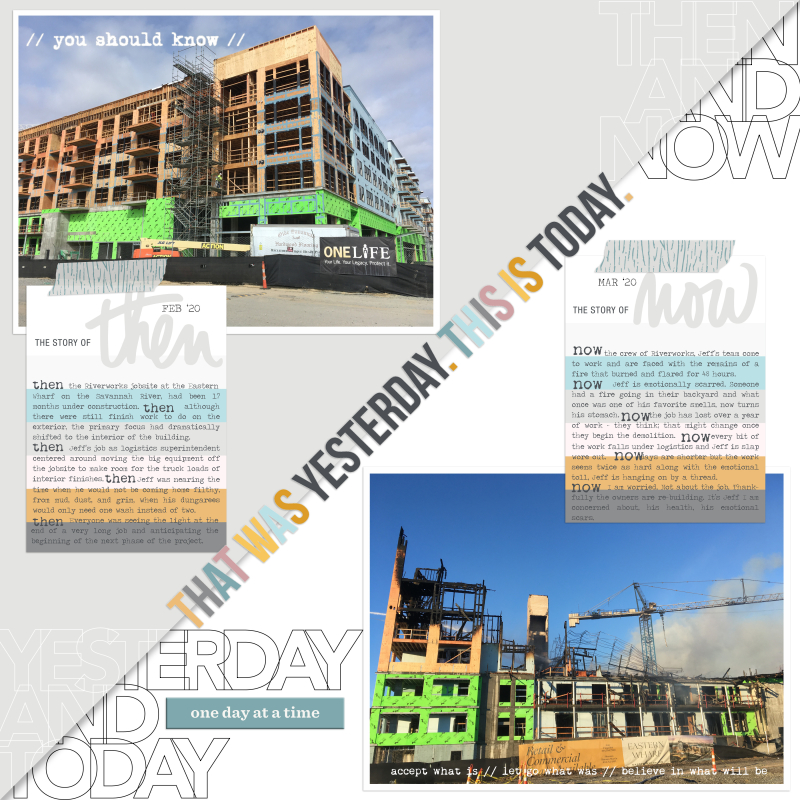 What one day does? It can change everything. It can rock our world.

Then, the Riverworks' jobsite at Eastern Wharf on the Savannah River was 17 months under construction.

Then, although there was still finish work left to do on the exterior, the primary focus had dramatically shifted to the interior of the building.

Then, Jeff's job as logistics superintendent centered around moving the big equipment off the jobsite to make room for the truckloads of interior finishes

Then, Jeff was nearing the time when he would not be coming home filthy from mud, dust, and grim, or when his dungarees would need only one washing instead of two

Then, everyone was seeing the light at the end of a very long job and anticipating the beginning the next phase of the project.

That was then. One day before the fire. Now, everything has changed.

Now, the crew of the Riverworks team come to work and are faced with the remains of a fire that burned and flared up for 48 hours.

Now, Jeff is emotionally scarred. The other day someone in the neighborhood had a wood fire burning and instead of what once was a favorite smell, now it turns his stomach.

Now, the job has lost over a year's work; that might even change [to longer] once they begin demolition and re-building.

Now, every bit of the work falls under logistics and Jeff is slap wore out.

Now, days are shorter but the work is just as harder and along with the emotional toll, Jeff is hanging on by a thread.

Now, I am worried. Not about the job. Thankfully, the owners are behind the team and are re-building. I am worried about Jeff. For his health, for those emotional scars needing to heal.