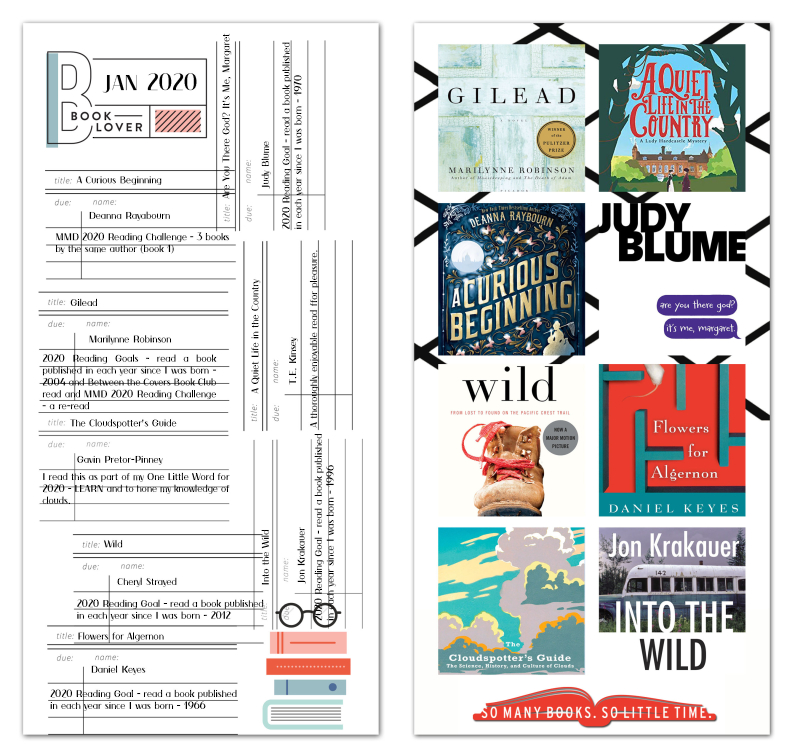 I definitely got off to a slow start - reading - this year. I seemed to be spending my time setting my 2020 Reading Goals or chasing after my One Little Word®, landing on LEARN before I ever cracked a book open. But once I started I had a book in hand every single day of the month. I began with a super fun, not-scary, murder mystery with well-drawn, likable characters, clever banter and splendid prose, a Veronica Speedwell Mystery by Deanna Raybourn - A Curious Beginning. And ended with my Between the Covers book club, our January read, Gilead by Marilynne Robinson, which is just as good, if not better, read a second time through and thoroughly discussed.

A Curious Beginning, a Veronica Speedwell Mystery, by Deanna Raybourn. What a delight!!! Although light on mystery it was chock-full of clever banter, well-drawn, highly likeable, clever, and whip-smart characters - and just so much fun. There were, however, a few parts that seemed misplaced, and I was confused to where the story was going but I believe, in this first in a series, they were included to develop the characters' backgrounds. I would have preferred a slower development, fleshed out with each passing book. Aside from that I adored this first-in-the-series and I am positive I will read the others.

Gilead by Marilynne Robinson. We chose the Pulitzer Prize winning novel, Gilead, for our Between the Covers book club read for January 2020, and I could not be more ecstatic, or undone, at the exquisite prose. Gilead is also my book selection for 'read a book published in each year since I was born' - 2004. Probably, the first fiction book I took pages - and pages - of notes. So many quotable, memorable, brilliant words.

The Cloudspotter's Guide by Gavin Pretor-Pinney. As part of my One Little Word® for 2020, which is LEARN, I want to revisit meteorology, my job, learn new things, re-learn old things. My extension goal is to revise the high school meteorology class for homeschoolers with the potential for a side business of teaching meteorology to high school homeschoolers in the fall, using my own newly-developed meteorology class. This was an easy-to-read book, although sometimes long-winded, on the science, history, and nuances of clouds. I took it to work with me - I am a weather observer - and would pick it up off and on throughout the month when the weather was fine.

Wild by Cheryl Strayed. I read this book, the first towards my 2020 Reading Goal - read a book published in each year since I was born. Wild was published in 2012. So, I'd heard and read some fabulous things about this raw, gritty, 'spectacular...a literary and human triumph,' - says the New York Times Book Review. I agree with literary. Not so much with spectacular and definitely not human triumph, except Strayed did hike the PCT (although not in its entirety) so in that sense it was a triumph. But, in the life sense I read no triumphs. It was definitely an engaging read. I couldn't put it down, actually, although I wanted to because Strayed's life choices, which continued even to her last days on the trail, seemed to learn nothing, no profound revelations, and were just so bad. There was so little to get excited about. I only enjoyed the trail life but even that was derailed by - again - her life choices. And, she was all about forgiving herself but she didn't seem to care whether she asked others for forgiveness, nuts. And, it seems to me that all her 'problems' were of her own making, although she didn't see that throughout the entire book. What is it she learned? I'm stumped. Nothing profound, here. The book did, however, make me want to go hiking and it was so well-written memoir. I do wonder if maybe Strayed figured things out afterwards, in the years following.

Into the Wild by Jon Krakauer. I read this book published in 1996 for my 2020 Reading Goal - read a book published in each year since I was born. Having read Krakauer's Into Thin Air I knew without a doubt that I would enjoy his investigative writing on Chris (Alex) McCandless, the young man who walked into the wilds of Alaska and never walked out. What happened to McCandless up to the time his remains were found? What led McCandless to lead the life he apparently had? So many questions and Krakauer handles every imaginable avenue with superb writing and engaging text.

A Quiet Life in the Country by T.E. Kinsey. Set in the early 1900's in England, a Lady and her lady's maid (who, as we find out, have the unconventional relationship of the times, as best friends rather than Lady and Lady's maid) have moved from the big city for the quiet life in the country and stumble upon a murder. The ladies insinuate themselves into the investigation as well as begin investigating on their own. Another murder, and a theft firmly plants the whip-smart, clever, quick-witted, and delightful ladies characters into solving the plethora of mysteries. Having read enough books with British language of the times, there were still some language-usage barrier that I had to navigate, but did so without it hindering my delight of the writing, whatsoever. I thoroughly enjoyed the book.

"Are You There God? It's me, Margaret" by Judy Blume. Yes, it's true, I never read this growing up but during my research I saw this book at the top of every list of books published in 1970, I knew I had to pick this book for my 2020 Reading Goals - read a book published in every year since I was born - for 1970. It's a coming of age book, not young adult, but middle grade and should be read considering the times. Throughout the book Margaret has regular conversations with God. She also is confronted with many things kids are confronted with growing up in the middle years, kissing boys, menstruation, gossiping, self-esteem, mean-girl attitudes and navigating the school years. Her teacher gives her class a year long assignment and Margaret chooses choosing a religion. Throughout the year she engages in the surface understandings of various religions and ends up 'unfriending' God (although she misses Him afterwards). What Margaret doesn't realize is that it isn't about religion and she had the beginnings of a relationship all along. 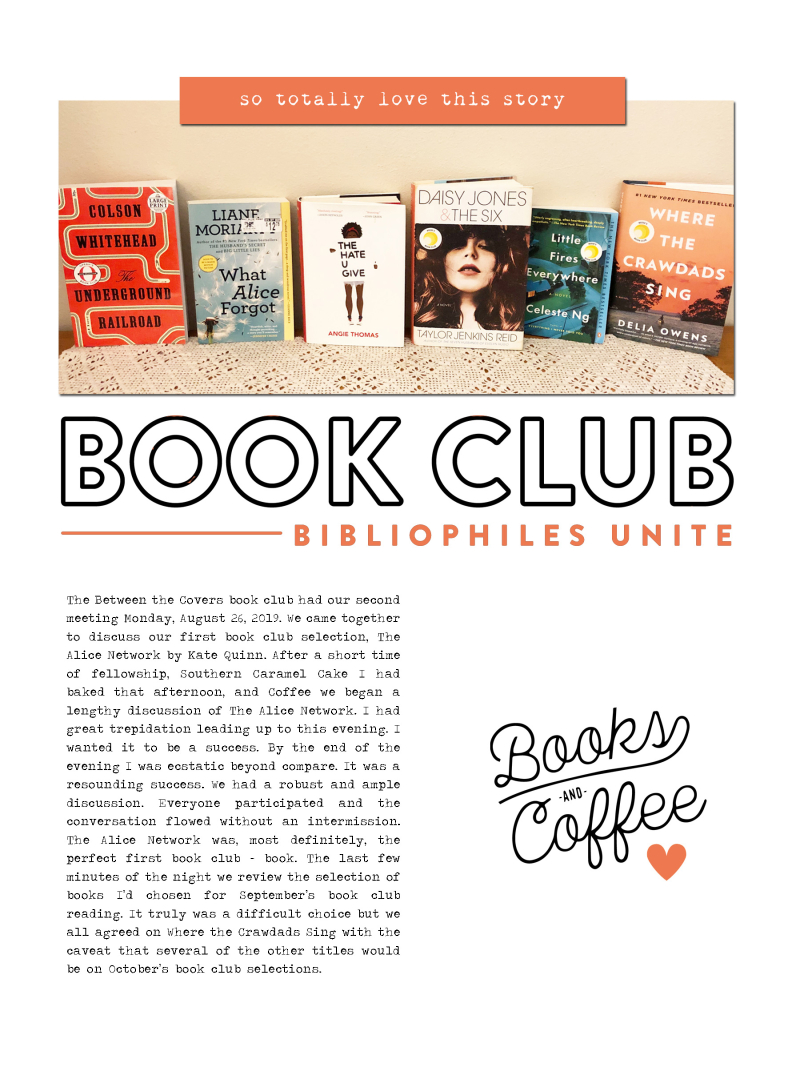 Our Between the Covers book club held the second meeting last Monday and it was a resounding success. We came together to discuss our FIRST book club selection, The Alice Network by Kate Quinn. After a short time of fellowship, dessert, a delectable Southern Caramel Cake I had baked that afternoon, and coffee, we began a lengthy and compelling discussion of The Alice Network. Everyone participated and contributed without a conversation intermission.

I had great trepidation leading up to the meeting, but I prayed fervently for a successful book club, and by the end of the meeting I was giddy. It seemed to be a resounding success. The last few minutes of the night we reviewed the selection of 6 books I had chosen for September's book club reading. It truly was a difficult choice but we all agreed upon Where the Crawdads Sing by Delia Owens with the caveat that several of the books from the list would make it into offerings for October.