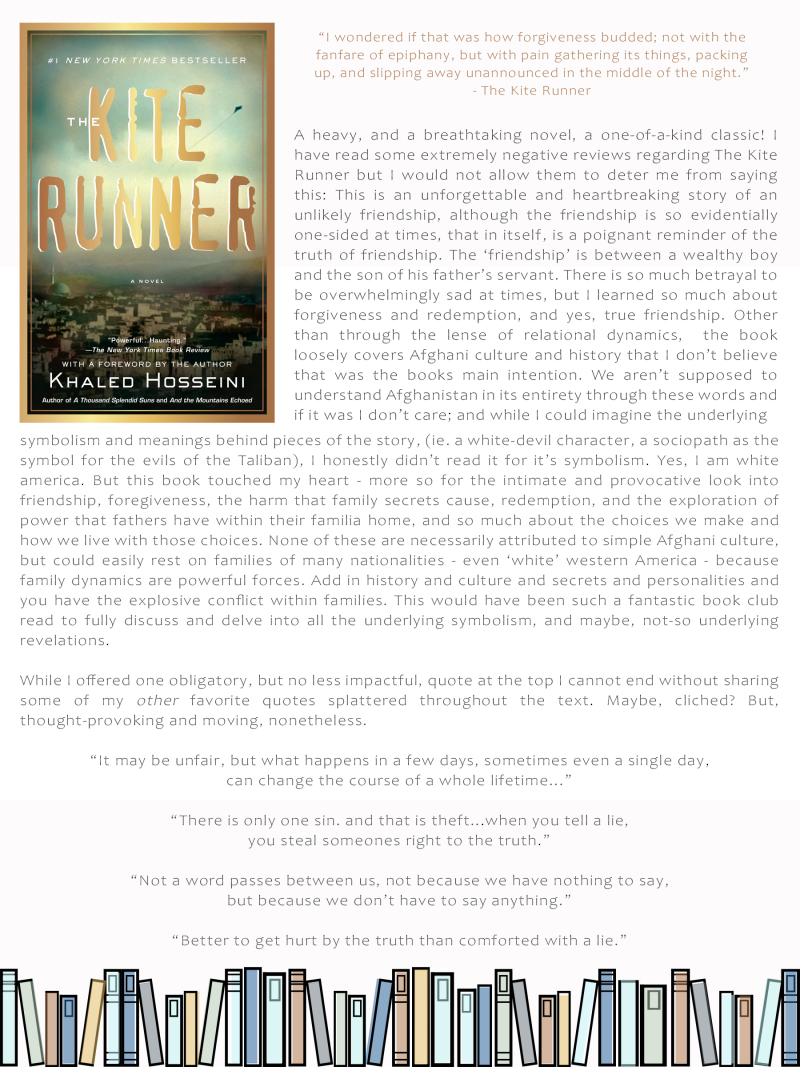 While some may not consider The Kite Runner a true classic I have found numerous definitions of what is and isn't a classic. The Classics Club even stipulates that it is up to the reader whether a book is considered a classic to them. While The Kite Runner was only published in 2003, over 17 years ago, it was quickly deemed an instant classic. Plus, I see it on 'classic' lists, often. Therefore, I included it in my classics list of TBR and I'm comfortable including it.

I decided to give my Classics Club books their own posts, but I will include them in my 'what I've been reading' monthly roundup as well. Mostly, because it will be an easier way to track my classic books that I've read - giving them their own posts (and category on the blog).

Of course, any classic that I read that can fulfill other reading goals (ie. The Kite Runner also fills the 2003 slot for read a book published in every years since I was born, goal), I will mark as read. 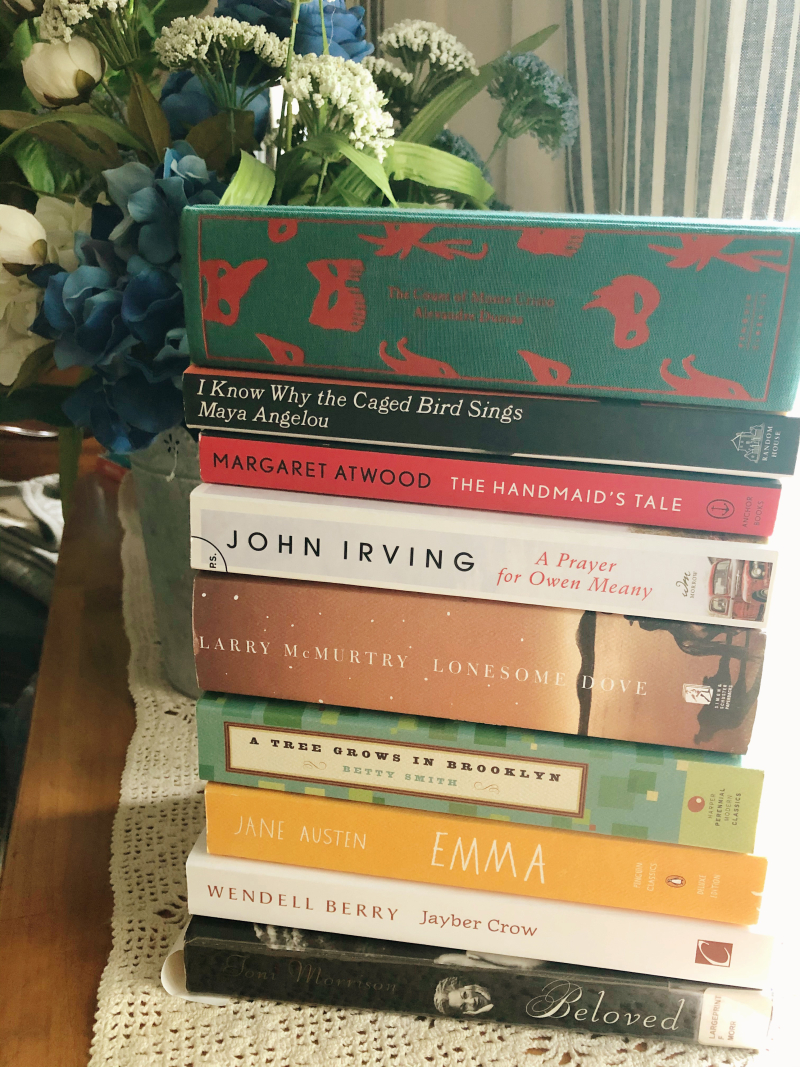 Today I am embarking on a new reading challenge. A long term challenge, not too taxing.

I had never heard of the Classics Club until I read that Elena at Beautiful Hope, a blog I read faithfully for her book reviews, mentioned she had recently joined the club and she is embarking on a 5-year journey into the classics. After doing some research, and because there really isn't a too short of a time limit, I decided to join the club.

The basics of the Classics Club is:

A club created to inspire people to read, and blog, about classic books. The requirement to join is to read 50(+) classic books in at most five years.

Choose 50(+) classics and list them on my blog. I have listed them below.

Choose a reading completion date. Yep! Did that. Check.

Review each title on my blog. I haven't decided how I will review the classic titles - yet. 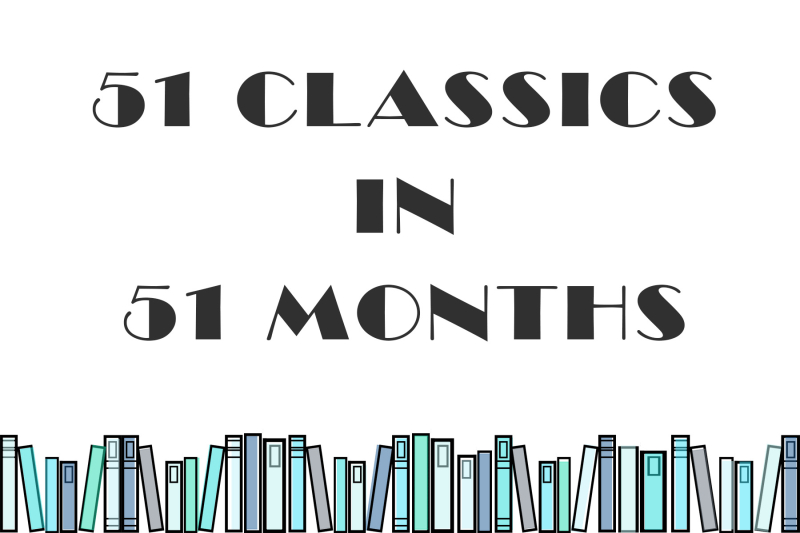 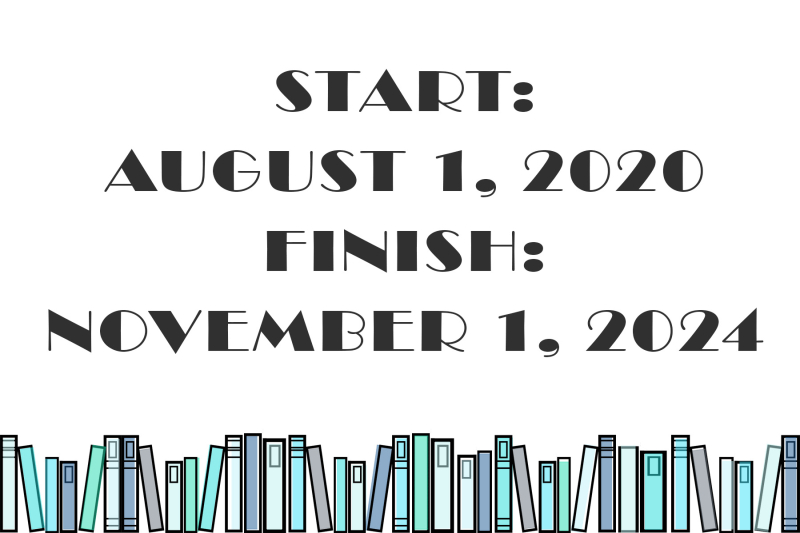 The following is my Classics Club proposed reading list (51 Classics in 51 Months). I say proposed because without a doubt, I'm sure, I will abandoned at least one or two or three of the titles and I will need to replace the titles with another classic. In other words I am expecting the list to change (this doesn't bother me; I don't need to be held to an exacting list). Many of these titles I have on other lists as books to read and I even have several of the titles on my bookshelves, unread. I have included a few more modern classics and a couple young readers classics because, while they may be for young readers, most adults will find them enjoyable, too. I know this because I have read quite a few young- and middle-readers that were fantastic.

3. The Cost of Discipleship by Deitrich Bonhoffner

4. In Cold Blood by Truman Capote

5. And Then There Were None by Agatha Christie

8. The Curious Case of Benjamin Button by F. Scott Fitzgerald

9. A Tree Grows in Brooklyn by Betty Smith

10. I know Why the Caged Bird Sings by Maya Angelou

14. The Diary of a Young Girl by Anne Frank

15. A Moveable Feast by Ernest Hemingway

16. A Prayer for Owen Meany by John Irving

17. The Alchemist by Paulo Coelho

19. Travels with Charley by John Steinbeck

20. The Kite Runner by Khaled Hosseini

22. The Handmaid's Tale by Margaret Atwood

23. Sense and Sensibility by Jane Austin

24. In the Heat of The Night by John Dudley Ball

27. The Scarlet Pimpernel by Emma Orczy

32. The Count of Monte Cristo by Alexandre Dumas

33. The Chronicles of Narnia by C.S. Lewis

34. The ABC Murders by Agatha Christie

36. The Man in the Iron Mask by Alexandre Dumas

38. Through Gates of Splendor by Elisabeth Elliot

39. The Pickwick Papers by Charles Dickens

42. The Complete Stories of Flannery O' Conner by Flanery O'Conner

43. The Three Muskateers by Alexandre Dumas

44. The Phantom Tollbooth by Norton Juster

47. Go Tell It On The Mountain by James Baldwin

51. The Wind in the Willows by Kenneth Grahame