Not many new recipes this month. But, I did go back for months and tried to bring some oldie recipes, but goodies, into our menu plan. I've been creating monthly menu plans since 2011, but only began storing them since 2012. While the colors may change every few months or so, they have evolved only slightly from the beginning. My menu planning process is pretty simple but it still takes about 2-3 hours to put one together. That may seem like an enormous amount of time to put a 'simple' menu plan together but it is an entire month plan, not week by week. Monthly plans relieve me from having to spend the time throughout the month that I probably just won't have on a set day, where as I can, towards the end of each month begin preparing the next months in one sitting, or in bits and pieces. Here's what I do:

1) I plug in Taco Night, Family Pizza and a Movie Night, Date nights, and any Boy Scout campouts, or weekend activities that may impact meals. We eat Tacos once a month and homemade pizza once a month and both are on Saturday's now. Once upon a time my homemade Tacos were once a week - and on Tuesday's for Taco Tuesday. But, - life.

2) If there are any meals I absolutely want again, soon, I'll go ahead and add those somewhere, usually towards the end of the new monthly menu.

3) Recently, because of my health, mostly, being so poor, Sunday's, after church we go out to eat. This can only happen as long as I have a job. Before this Sunday's were for those meals that like Sunday dinners: homemade soups with homemade bread, homemade Salisbury steaks with onion gravy and mashed potatoes, you know, those comfort food kind of dinners.

3) Because Wednesday's we have church (we serve up in Elevate, the kid's ministry at our church); the meal has to be something that can travel well because I bring Jeff's meal to him at church. For instance, Wednesday's would not be a breakfast for dinner night. Scrambled eggs or omelets and hashbrowns don't travel well. A casserole is a good bet or spaghetti, etc.

4) I visit Pinterest and my Food Love board for NEW recipes I want to try. There is usually one or two a month that will be a new recipe.

5) Then, I go back through my previous published menus and search for some good meals and just start plugging those in. I try to add salads if the meal doesn't have vegetables in the dish but some dishes, like my Italian Chicken Skillet which is on the menu for this week is loaded with zucchini, roasted tomatoes, and mushrooms, so, with spaghetti it is a complete meal. But, if I'm serving my Spicy Sausage Bundt, for instance, I'll either steam broccoli or make a Caesar salad to serve with it.

6) There is always a 'sandwich' dinner or two. This month there is Hot Italian Subs, Turkey Bacon Melts, and Patty Melts scattered throughout the month. Sandwich-type meals can be easier, sometimes.

7) I make dessert almost once a week - for our small group on Sunday evenings. This was another reason we began going out to eat on Sunday's. Between my poor health, two breakfasts a month for the Elevate volunteers, and small group desserts, Sunday's became too much for me to handle.

And that's my menu planning.

I grocery shop once a week, for the week ahead (usually on a Friday afternoon after work, but sometimes Saturday morning). With the menu all planned out, making a grocery list is a cinch. We only stock up on things when they are on sale and ONLY if it is something we regularly use. Because our dinners are from scratch, the type of sales the stores carry don't benefit us often. One thing we are considering heavily this year is purchasing a whole cow from a local grass-feed farm. While the initial outlay of funds will be costly, our weekly grocery bills will reduce dramatically on those 'beef-heavy' weeks.

Yes, it says September Menu 2015 but it really is October's menu. I forgot to change the month at the top.

A bunch of new recipes to try this month: Pumpkin Bread (only because Elizabeth made this recipe while we were up visiting and I only had 1 piece of bread and I'm dreaming of this Pumpkin Bread), Bacon Onion Horseradish Mashed Potatoes (yum, horeseradish!), a couple of main dishes: Kielbasa, Peppers, Onions, and Potatoes Hash, Herb Roasted Cheesy Bacon Potatoes, and Chicken with Sundried Tomato Sauce, and then a couple more Small Group desserts: Country Apple Fritter Bread and Blueberry Cinnamon Swirl Crumb Coffeecake.

And a month chalk full of deliciousness!

July was a month of very few date nights because we were so busy with summer activities - all good, but man, I miss our dates, which are back on the schedule for August.

We have an interesting month headed our way with return trips home, short weekend trip, and a week long trip for Jeff and the boys. A couple of new recipes, all of which I am looking forward to making. I am making it easy on myself while the boys are gone to church camp and we are going out to eat a couple of times - unusual for us during the week - but I'm good with it. I'm also making super simple meals for Mom and I while Jeff and the boys are at Boy Scout camp.

We also have an 18th birthday to celebrate: Dinner out, maybe a cake (maybe not:), and Mission Essential shooting range!!! Really looking forward to that because Jeff bought me this sweet little shooter that even my rheumatoid arthritic hands can hold.

The boys are going to be at church camp the end of the month. We will have our Friday night dates, a couple nights we'll eat out - just because. And, I'm going to try a couple recipes. Now that I'm responsible for most of the cooking again, new recipes are no-brainers.

Farmstand One Pot Wonder - gotta love those One Pot dishes.

Lastly, a Knock Your Socks off Slow Cooker Chicken and Sausage

Now that I work dayshifts and get home in plenty of time to cook dinner, with maybe some prep work from John and Jarrod, I don't hesitate to put the more 'difficult' menu choices on during the week.

One might think that I missed creating an April Menu but I just didn't get it put up here on the blog. I think these days there would be mutiny in my house if I stopped creating a menu. And I would be leading the rebellion. Having a monthly menu made is key to making our lives easier.

This month, or at least the last half of the month is a key time as it is when I move to the day shift at work and I will be able to come home a cook dinner. A change that John and Jarrod are looking forward to immensely.

While the boys can't wait for me to go to day shift I too am really looking forward to the change as well.

For a couple months now we have only had computer access to government sites to include no save capabilities to anything but the hard drive so I have had to make our monthly menus in my not-so-free-time at home. This month, one of those longer months, it came down to the last day of the month before I finished the menu.

This month all of the new recipes I've included in our menu are for the weekend desserts for small group, or our weekend dinners, both of which I will be the chef. John and Jarrod are praying hard that my companies' bosses will approve of my shift change from the swing shift to the day shift because that will mean I can cook dinner every night instead of just weekends.

But, once again, thanks be to God, we are eating well. Oh, and Jarrod decided he wanted to make the Roasted Chicken, Roasted Red Pepper-Pesto Fettuccini dish that we know and love.

Because life has been overwhelming I am just now posting our menu for the month of February. We have been using it even though the first week I had to keep referring back to the copy on the computer because I hadn't even had time to print a copy for the refrigerator. I think a mutiny was in the works by my sons; my menus have created little crazy monsters - they kept asking what are we having for dinner? what are we having for dinner? It was nuts.

So I finally got the menu printed and there is peace in the world. 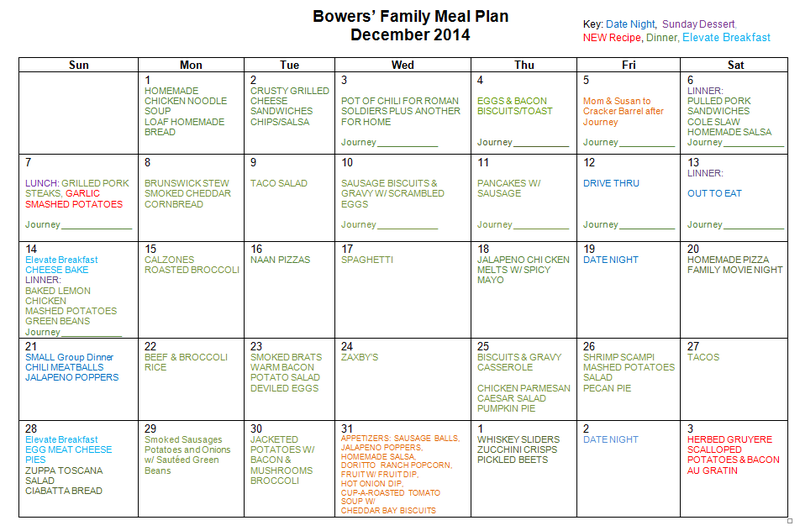 A bit late posting here but I've had our menu plan up since before December. I had to because our month is crazy, crazy. Journey, at Savannah Christian Church, began on the 3rd and Jeff, John, & Jarrod are serving ALL 10 days of the Journey. I am serving only 5 of the 10 days, and Mom and I will go through the Journey on one of the days. This means some meals will be out-to-eat or drive thru.

Jeff is Roman Calvary again this year so he'll be riding a horse - again. Jarrod is a Roman Guard (he purchased his own helmet and sword). With his height, and dropping his voice just a bit he sounds pretty darn stern and gruff. John will be in the blacksmith shop (again, this year) and the carpenter's shop within the city, Bethlehem.

Christmas dinner is Chicken Parmesan again this year. We like the simple dinner change. And once again this year we will have a New Years Eve bash - just family mind you - with tons of food and movies. 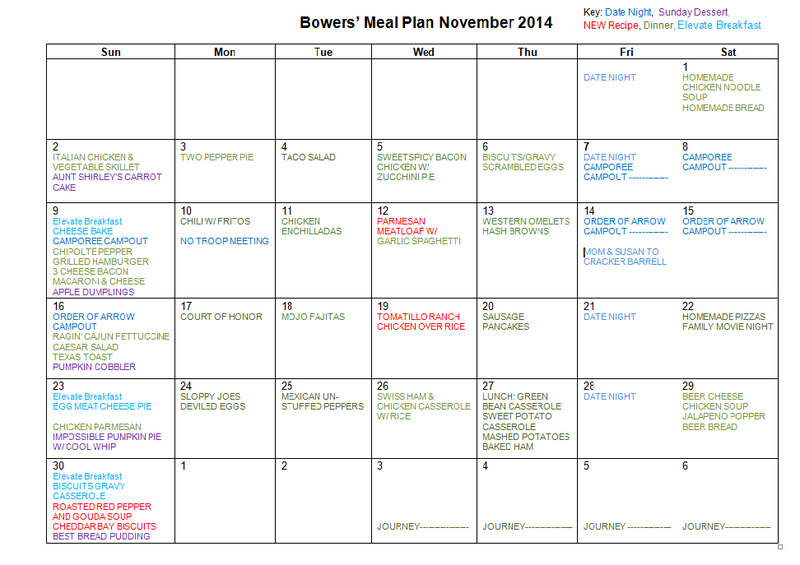 I'm trying to stay on top of things amidst the disarray that is my house as we slowly, and I mean very slowly, unpack Mom's boxes, make decisions on whether to keep and where it goes (household or storage), chuck (ie. trash), or Goodwill. We have boxes already for Goodwill and we aren't anywhere near done.

So, when I found some time on a clear day I could see forever I put together November's meal plan, with a couple Boy Scout - Order of the Arrow campouts thrown in the mix, and then there is Thanksgiving. I will work on Thanksgiving but I'm home at lunch time so we'll shoot for a nice Thanksgiving lunch.

Just a couple new recipes this month: a Parmesan Meatloaf served with Garlic Spaghetti, a Roasted Red Pepper and Gouda soup that I've been wanted to try for ages, and a Tomatillo Ranch Chicken over Rice I'm looking forward to the flavors.

I also found my recipe, that I'd misplaced for years, for Impossible Pumpkin Pie that I'll serve to Small Group. I might even make a homemade Cinnamon Cool Whip.

Yummy meals. And I can't say enough how helpful having a meal plan is to - well - planning meals for the week, or even the day. Do I make changes through the month? Sure. Sometimes even an entire week of changes. But, this plan more often than not is the go-to plan for daily meal planning.