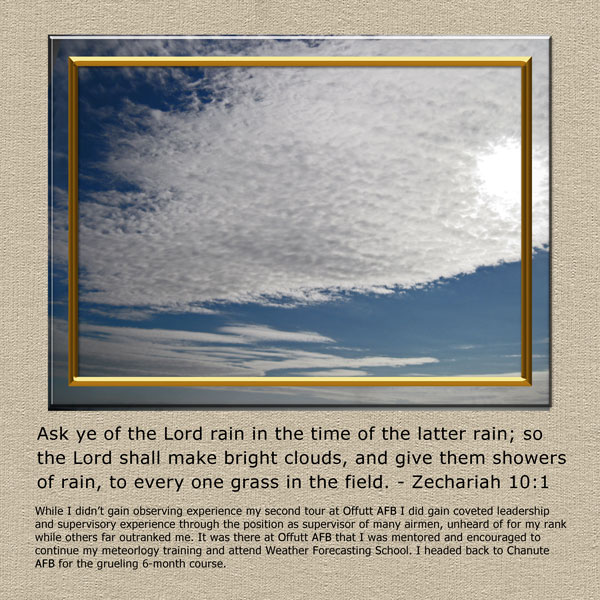 While I didn't gain observing experience my second tour at Offutt AFB I did gain coveted leadership and supervisory experience through the position of supervisor over many airmen, unheard of for my rank (while others far outranked me were supervising no one). It was there at Offutt AFB that I was mentored and encouraged to continue my meteorology training and Weather Forecasting School. After being selected for Non-Commissioned Officer Leadership School, again, far ahead of others who outranked me, I headed back to Chanute AFB for the grueling 6-month weather forecasting course. 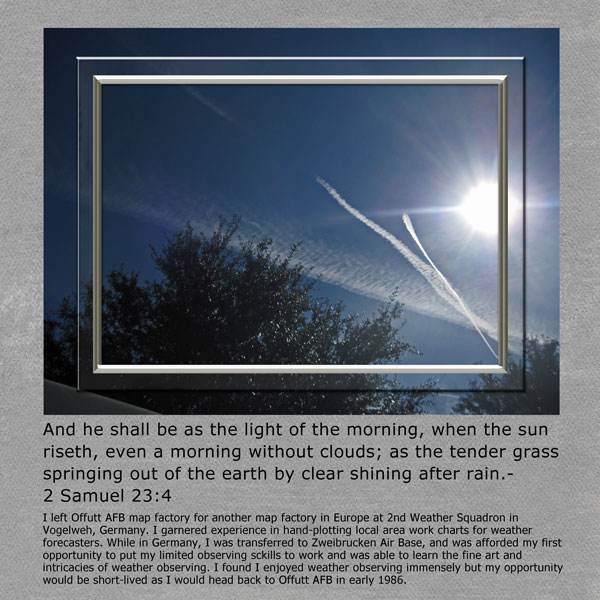 I left Offutt AFB map factory for another map factory in Europe at 2nd Weather Squadron in Vogelweh (Army Barracks), Germany. I garnered experiences in hand-plotting local area work charts for weather forecasters. I became quite proficient at the art of plotting, and it was an art with speed; so much so I could plot a weather observation station model plot in the size of a dime. While in Germany, I was transferred to Zweibrucken Air Base and was afforded my first opportunity to put my limited observers skills to work; and was able to learn the fine art of weather observing. I found I enjoyed weather observing immensely, but my opportunity would be short lived as I was transferred in 1986, mid-tour, back to Offutt AFB, NE and Air Force Global Weather Central.

I enjoyed my job most, in those early days of my military and meteorology career, while working at Air Force Global Weather Central, when I assisted the Severe Weather Forecast section. Here, I plotted weather observation reports, especially severe weather reports. These, in turn, assisted the severe weather experts in issuing weather warnings and advisories for the entire United States.

By the way, the cloud photos in my Meteorology Story Book are all taken by me (except one or two by Jeff). The photo on this page is the mid cloud altocumulus. I am not sure why, because I've seen some beautiful skies but altocumulus is my favorite cloud, especially when it's covering most of the sky in a single layer.

Completing Weather Observing School in the dead of winter I headed to my first duty station - Offutt Air Force Base, Nebraska. I did not, however, continue training as an observer. Instead, I began working in an old hanger where the Enola Gay had been built - the airplane used to drop the Atomic bomb on Hiroshima, Japan, training as a weather specialist (which is what we were called instead since we weren't observing) making maps used by meteorologists around the world.

The old hanger was home to many offices including Air Force Global Weather Central, which is where I happened to each day for my weather specialist job. It was a secure facility. I worked with a team of 60 people, mostly weather forecasters, some officers most NCO's, and as a new airman never imagined I'd ever become one myself. As one of the weather specialists, we were basically the map builders, the acetate  cleaners, the floor buffers, in other words, the errand airman, getting the short end of the stick all the time. The weather specialists fell for any of the weather forecasters who would take over buffing their section from the specialists on Sunday night shifts.

In no way shape or form did I ever like my job - except the people. I had an amazing Colonel (who made full bird Colonel shortly after I left) who always had time for me, or I should say always made time for me. When I would walk in for my shift he was always already on shift and when he'd see me he would yell across the entire floor (our work office was a very large opened area a few thousand square feet), "Sue - how do you do?" Which I in turn I would laugh. Smile real big. Turn red every time. And feel like part of the team. Always.

And then there was that time our team had a party at one of the NCO's house (who happened to be my supervisor). About ten of us played strip UNO...and that is all I'm going to say about that. Except, thankfully, I won! 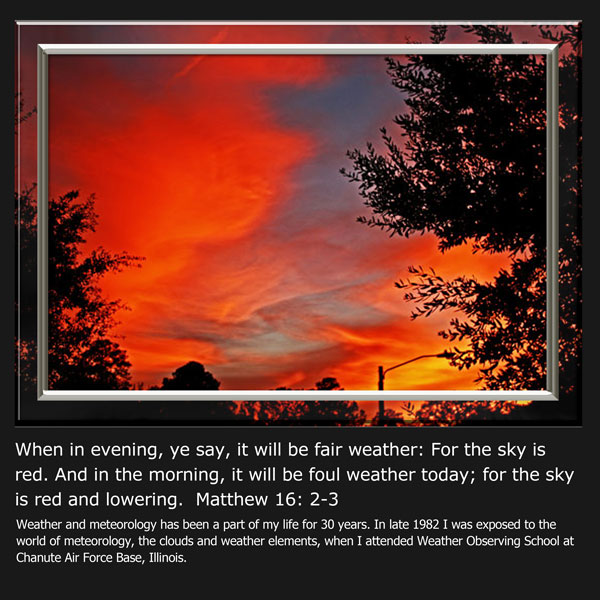 It has been quite some time now that I have worked on my Meteorology Story Book (I have renamed my project) and when I recently returned to my story telling I found I was uncomfortable with the pages, in particular the type font that I had been using for the scripture verses and the journaling.

So I made some changes. And when all is said and done and the book goes to print I still may make even more changes, but this is pleasing to my eye right now. While I am using two different types of font they are very close together in style but different in size, highlighting both the scripture verses, which are all verses related to meteorology, and the journaling which is my meteorology story.

Each page, except a few story pages where I am considering adding small stories, include a photo of clouds in the sky taken by me (and maybe a couple photos taken by Jeff).

Did you know that long used folklore tale, "Red skies at night sailors delight; red skies in morning sailors take warning" isn't actually a folklore but straight from the word of God? Yep, it's in Matthew 16: 2-3. It makes my heart smile, and dripping with pride, to know God was the very first meteorologist! And, to think He's allowed me to be on his forecasting team!

I began my meteorology career in 1982 at Chanute AFB, Illinois. Chanute AFB isn't even a base any longer. This is an awesome website called On Broken Wings - Chanute Air Force Base | The Art of Abandonment  It's gone now. As are the barracks/dorms I stayed in. And the Airmen's club I frequented. And White Hall where I was taught weather observing and a couple years later Weather Forecasting...

Weather Observing school was my first taste of the world of meteorology and only a small, but essential part of weather forecasting. In observing school I learned the states of the sky, the cloud forms and types, weather elements and taking weather observations. So interesting from where I began I would be doing again - today.