Elizabeth posted some fall photos of Ella and this little guy, Noah on Facebook and since I had access to the computer, because that's an issue in my house during this season of dual enrollment college classes for John and Jarrod, I couldn't wait to make the first page, of probably a few, using the sweet pictures Elizabeth captured.

But, that's not all! In less than a month I'm going to get to wrap my arms around this cuteness-run-a-muck, handsome little dude. It's going to be glorious!

I rarely get so "creative" with my pages, usually it is photos plus words and one or two embellishments but I was inspired by a page I saw on pinterest and when Elizabeth sent me some fabulous photos of her - and Noah I just couldn't resist. In addition, I had the time and the capability. The time: because my men are on a hiking trip this weekend which left me with my hands free and my time free to do with what I want and the capability: because with my men on a hiking trip I had the computer all to myself. Which, these last couple of months they've been dual enrolled at Point, has been limited access.

Noah is getting tons of character, even just at 6 weeks or so and I couldn't resist these photos.

While I've had to remind Elizabeth to post pictures she does and gives me quite a few to choose from which are my favorites. This sweet photo of Noah is dripping with sugary yumminess and is one for the best category. Noah is filling out nicely and I just want to scoop him up and cuddle with him. Adorable!

Missing him so and can't wait to have him in my arms again in November. 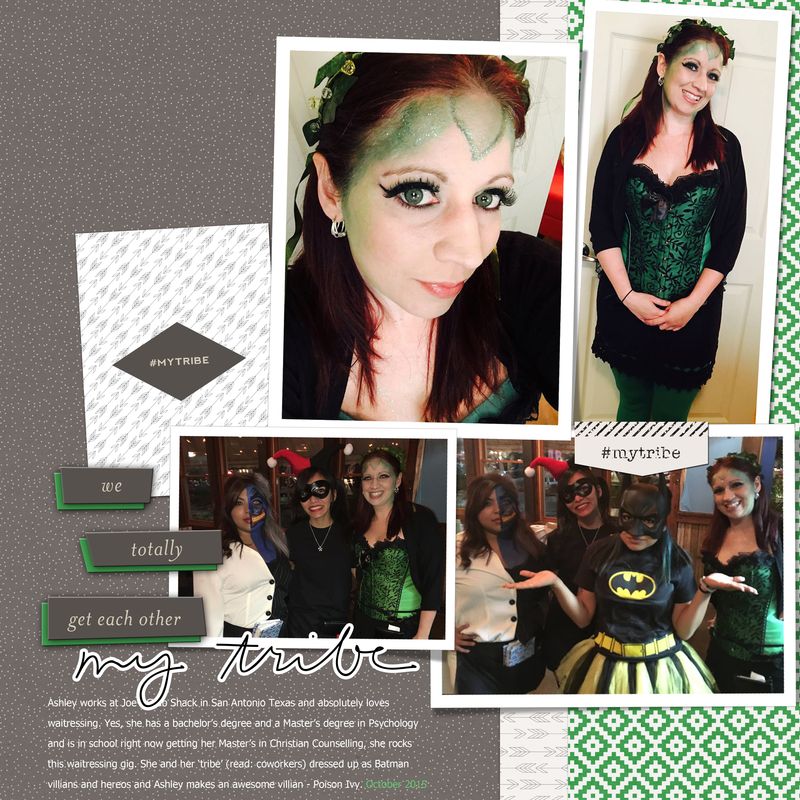 I love it when my daughters post pictures on facebook and see without a doubt from those photos how much fun life can be - even away from me!

Ashley and her Joe's Crab shack co-workers dressed up in superheroes versus villains costumes and if you'd asked me ahead of time whether Ashley would pick a superhero or a villain I would have said, "hands down - a Villain!" And I would have been right. She picked Batman's Poison Ivy - to go with her gorgeous red hair!

I love that even though she has a Bachelor's and a Master's of Psychology and is currently in a Master's in Christian Counseling program she can still love working as a waitress, too!

I asked Ella to sit down with me while we were visiting this weekend and I asked her some questions. I've wanted to do this type of page for awhile and hope that I'll be able to do this every year (somehow) and also, ask the same questions of Wyatt and Ian, too. This was so much fun!

We have really been enjoying our time with Elizabeth and the kids!

All of the embellishments on both pages are from Ali's Build Story Kit. She makes scrapbooking easy.

Super simple page with amazing photos + a story. The same as other years. And different. It definitely wasn't the typical 4th of July for us as we were bombarded with some hellacious thunderstorms late afternoon and into the evening of the fourth. It was questionable we were even going to see a break in time for fireworks but,

We decided to brave the torrential downpours and dressed in rain gear for the occasion. We found parking easily, duh! Maybe, because there wasn't anyone on River Street. Keeping to our tradition we set up chairs and saved room (read: laughter here) for our friends to arrive. We were meeting up with some friends who needed the interaction and even though it was still raining light it was a good time. They have five kids and with our boys there for the companionship they were all good kids, waiting patiently for the fireworks.

Not surprising, God showed up. The rain and the storms cleared, the lower clouds moved east and the fireworks began.

This is a 6 x 12 page. I have some templates from various designers for this size format and now that I put one together with a nice dose of journal my plan is to make more of these. Tell the stories behind those photos that may not necessarily divulge the story just so.

FROM WHERE I STAND each weekday morning I can look out over the expanse to the east, in that first weather observation of the day and receive a peek at the sky as the sun is rising before 6am far to the east. By the time I take my second weather observation FROM WHERE I STAND the sun has broke through the horizon and I am offered my first look at the eastern sunrise. Quite simply, beautiful!

FROM WHERE I STAND no matter how bad my pain is in my low back, hip, and down my right leg these skies that greet me each morning FROM WHERE I STAND make me smile. I never take them for granted. As I've taught my meteorology students over these past few years to 'look up' every time they walk outside, I have too. I have to. For my sanity, really. To find joy. To see God at work.

Because FROM WHERE I STAND life can be so difficult, my heart cannot bear up under the pain. So, I look up and there He is! In every painted sky. Reminding me that He will never leave me, nor forsake me!

How fun is this! Battle Ball was a first time experience for Jeff, John and Jarrod and they had a blast!

The Savannah Christian's Children's Ministry, the Elevate team invited all its volunteers out for an evening of fun, fellowship, a picnic and Battle Ball at Forsythe Park in downtown Savannah one evening in late July. We had never experienced Battle Ball and while John and Jarrod were hesitant at first, and held back for a little while, Jeff was not and jumped right in to the action.

We brought a picnic dinner of fried chicken, chips and fresh peaches for dessert. After we ate our scrumptious fare, Jeff plunged into the wild, crazy, tiring, and sweaty action of Battle Ball. He had a blast! Our neighbors, the Cranes, were there so Jeff had an ongoing battle with Davis before John got into the action. No question John was the biggest battle ball challenger on the field and all the kids were a riot brushing against him and with a little tap John would send the kids' balls rollin' over sometimes a couple times with the kids getting back up and coming back for more. It was a hoot to watch from the sidelines.

Finally, Jarrod got into the action and he and John tag teamed against their dad. Although Jeff put up a tough fight, two 260 pound guys against one 220 pound guy is no match - they sent him rolling. Oooh! POW! BAM!...and I'm roaring on the sidelines.

Day 4 of our memorable whitewater rafting and kayaking trip on the waters of the Natahala River falls in duckies. It was the last challenge of the day. We had the river path laid out that we would take over the falls.  Unexpectedly, a canoe pulled out in the path of our duckie causing us to veer off course to preclude t-boning the canoe. This in turn begot us missing our projected path and hitting the falls at the worst location, a dip in the river derived by a high rock, backdrafted the water allowing a suction hole.

This propelled our duckie into a 90 degree fold and ejected us off our duckies, head first into the freezing waters of the rushing, raging river's falls smacking us against the rocks.

At that point Jarrod lost his good and faithful water bottle and both Jarrod and Jeff's pride and buttocks were bruised. Once we got back in the duckie we were done for. We got our duckie to the raft parking and called it good for the day.

(by the way: these are the words of Jarrod.)