I finished Whole 30 the early part of August and I wanted to share a recap, and some pros and cons as I worked through the 30 days.

I stayed the course and didn't cheat (that I know of). I was most careful with removing sugar from my diet as it was the hardest to remove because it is often hidden in foods. Although I love cheese, the no dairy and no grain of any kind was easier than I imagined. But, surprisingly, I craved things like milk on a bowl of cereal or a dessert, more than cheese. Well, except for pizza. I craved pizza.

Date nights with Jeff were challenging as we were severely limited in our restaurant choices. But, here is what I did when we went out on our dates, or other times we ate out as a family.

2. Steakhouses (like TBonz, Longhorns, and Texas Roadhouse) are your friend. Definitely, I ate the steak and most often had grilled vegetables or a baked potato (if I brought my jar of Ghee with me). If I brought my Whole 30 compliant salad dressing I could have a side salad minus cheese and croutons. Do not hesitate bringing along that Ghee (clarified butter; no dairy) or a container of Whole30 compliant dressing. I put them in a plastic bag in my purse (I carry a large purse so this was not a problem). When we went to the movies I brought bottled water in my purse as well.

3. Ruby Tuesday's for their salad bar - and for the win. You have to be careful not to put any of their diced cold cuts, like the ham, because of the sugar content. But I piled on the greens, tomatoes, green peppers, beets, onions, broccoli, hardboiled egg, and finished it off with vinegar and olive oil. I ordered a side of grilled chicken for the protein. I always walked away full.

The key to completing a Whole30 is preparation. I researched what I could eat and what I couldn't. I read the book It Starts With Food, which was the best preparation, as the author gives the reminder that it is only 30 days so we shouldn't have to cheat; because we're adults, right? I couldn't shake that comment  - so I didn't cheat. I also prepared food ahead of time.

On Sunday afternoons I prepared Salads in a Jar for my lunches which I alternated with Lettuce Wraps made of sugar free bacon, sliced hard boiled egg, tomato slices, and Whole 30 compliant Chipotle mayonnaise. I could just grab a jar of salad from the refrigerator in the morning, tuck it into my cooler, with a bowl, grab the Whole 30 compliant Tessamae's dressing (Greek was my go-to), and I was set for lunch at work.

Breakfasts were almost exclusively eggs and sugar free bacon. But, hey, I was eating breakfast, it was filling and would hold me over until lunch time. Except for a piece of fruit mid-morning I never felt hungry. Sometimes I would include tomatoes to my breakfast, or sausage patties, or a hash but my favorite breakfast was plain 'ole eggs and bacon.

I learned how to spiralize zucchini which I made with a yummy roasted red pepper and garlic sauce.

I learned I could do it. It may seem, 'Well, it is only 30 days. Anyone can do that!' I disagree. After reading the struggles everyone has I think it takes preparation and mindset and commitment and discipline. Life interrupts and one has to be disciplined and committed to not cheating. If you modify a Whole30 you're not doing Whole30. If you cheat, you have to start over.

I found having a cheerleading team helps. I found a local Facebook group with people I knew already. I am sure this accountability was essential to my success. While Jeff appropriately cheered my successes he definitely wasn't that accountability - except that last week when I was so ready to quit and he talked me through why I shouldn't.

As I said I struggled most the last week and was so ready for it to be over with. But, every day I got on the scale, the scale told me it was all worth it because in 30 days I lost 23 pounds.

Now, weeks after finishing Whole30 I am realizing my body does not like sugar and grains. I think dairy is okay but, definitely, sugar, in larger quantities, as I've returned to eating non-compliant I have noticed a return of inflammation in my knees and hips and back which in turn causes pain into my lower extremities.

While I don't expect to return anytime soon to a strict Whole30 compliant, although I will complete a 30 day regimen again at some point, I am, however, returning to about a 80/20 compliant. For my body's sake. 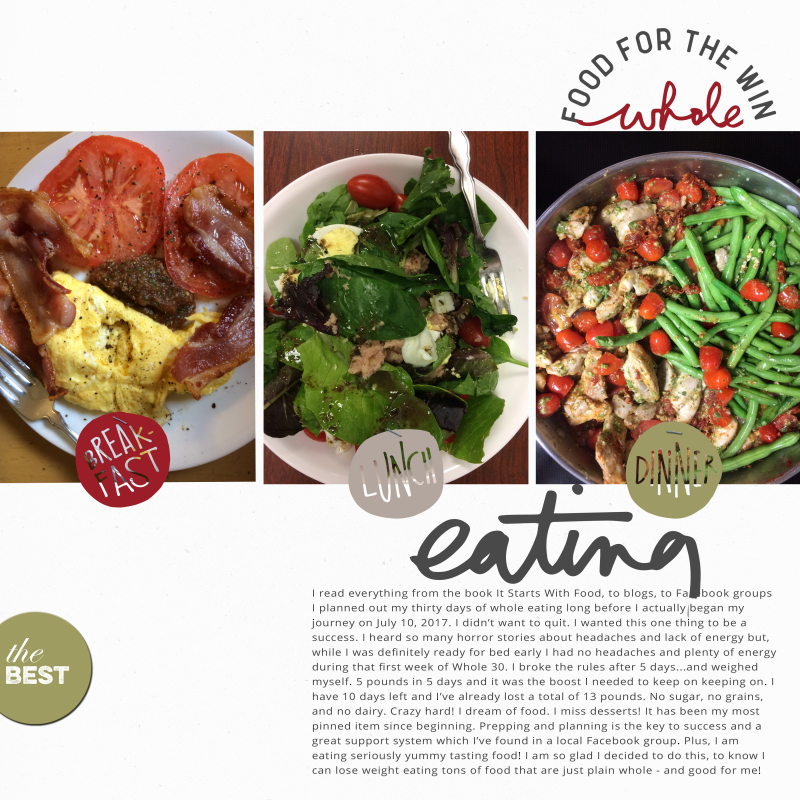 You guys! 10 days still to go and I've already lost 13 pounds!!!! I miss French Vanilla creamer and desserts (even though I don't eat desserts very much I'm craving them)

Whole 30 | the beginning of the journey

I am unashamed to admit I need help. I love food. But, my body betrays me, almost daily, that food - or at the very least the food I eat - doesn't like me. I am at a weight I said, after having John and Jarrod 20 years ago, I would never get to again. Yet, here I am. It is a painful, heart-wrenching, gut-wrenching admission.

I like me. I buy new clothes and like buying new clothes. But, the mirror is evil-personified.

Then there is moving. Or, not being able to move. Sometimes, just walk let alone run. I set under-inspiring bucket list goals because I can't move or my size limits my choices.

That is not the only reason.

That is not the most important reason.

Yesterday, I began Whole 30, a journey, I hope, to living free of pain. Of weight. Of an unhealthy relationship with food.

Maybe, I'll receive the added bonus of hearing my husband say, "You're beautiful!" But, for clarification, he already has my back and loves me deeply and generously.

For the next 30 days I am on a cleansing journey. Cleansing my body of the unhealthy that causes - well - inflammation. I have rheumatoid arthritis, arthritis, bursitis, my back aches, my hips scream, my knees don't work, and I need relief. After reading the book, It Starts with Food, I felt this was the best avenue I could take especially after reading the author of the book's very own sister had RA and because she changed the way she ate all her RA symptoms disappeared.

Don't get me wrong. This isn't a whim or skim the top of the water decision. Instead, I'm jumping in with both feet. I read the book. I weighed the consequences. I joined a local Whole 30 Facebook group. I have researched and planned and plotted my course. I can't spout all the science behind it but it made sense as I was reading and researching. Change the way you eat. Remove those foods that have been proven to cause inflammation.

What does this involve?

I'm eliminating certain foods from my diet. Simply put, I am removing all sugar. The only, and I mean ONLY sugar allowed is in fruit. Period. Therefore, I am reading labels, especially packaged meat such as bacon because most bacon HAS sugar. Can you believe it!

I am removing all grains, which of course means breads, pasta, rice, etc...and a host of other things because it is comprised of some form of grain.

Then, there is dairy. Yep! Gone.

No CHEESE allowed! I know, right? It is enough to say, 'Nope, can't do it. Not gonna' happen!'

But, there is good news.

Meat and seafood and vegetables (except corn) and fruit are allowed.

How am I going to do 30 days of this kind of eating? Simple.

And, at the end of each day I didn't cheat I am checking off the day as a success. I'm not seeing the 30 days I'm seeing today. Tomorrow I will only worry about tomorrow's success.

Well, there is the planning I've been doing. And the meal planning. And the whole food buying. And the practicing. And the food prepping. And talking it up with my husband and my family who are in my corner and want me to succeed. And the Facebook group cheering me on with 'You've got this!'